In his first European race of the season, UCI World Champion Peter Sagan (BORA-hansgrohe) took eighth position yesterday in the Italian one-day race Strade Bianche. Afterwards, he expressed his satisfaction with the result.

Having last raced at the Tour Down Under in January, Strade Bianche would be a good opportunity for the Slovak rider to test his form at the start of the Spring Classics season and the 184-kilometre route would be challenging for a number of reasons.

The undulating terrain would sap energy, while the transitions from road to gravel in each of the race’s eleven sectors of ‘Strade Bianche’ would test bike riders’ handling skills to the limit, ranging in length from less than a kilometre to almost 12km. In addition, the cold and wet weather conditions of the twelfth edition of the race took its toll on riders.

An early break took control early on in the day, and with the conditions as bad as they were, looked as though they might stay out ahead for the whole day – especially after the peloton split in two. The escapees had to ride in the same conditions however, and these conditions had a clear impact, with some suffering in the bad weather, and others dropping off due to punctures.

With 60 kilometres remaining, the small escape group was caught and the race started heating up. Attacks, counter-attacks and chases saw the UCI World Champion, Peter Sagan, in one of the chasing groups, with strong support from teammates Daniel Oss and German National Champion, Marcus Burghardt, but as the leaders entered Siena for the final 10 kilometres, it was clear that Peter would not be in a position to fight for the win.

It was the stronger climbers who were making the most progress on the remaining hills, with Lotto Soudal’s Tiesj Benoot managing to hold his lead on the front. After a hard ride, Sagan finished in eighth position, with teammate Gregor Mühlberger close behind in tenth.

Peter Sagan – “There is no doubt that the Strade Bianche lived up to its reputation this year with a very hard day under difficult weather conditions. It was my first race after spending nearly a month at the high-altitude training camp and the sensations were good. We showed we had a strong squad with Daniel Oss, Marcus Burghardt and Gregor Mühlberger doing great work at the front. I’m happy with today’s result, although, obviously, we could have wished for more. However, it’s just the beginning of my European races and there is a long way ahead of us.” 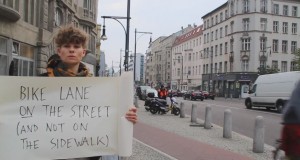 Cycling in Berlin. (Theory vs. Reality)