The Irish pair of Lydia Boylan and Lydia Gurley finished 9th in the Madison at the 2018 UCI Track Cycling World Championships yesterday evening in Apeldoorn, The Netherlands. Gold went to Great Britain, silver to the Netherlands, and Italy took bronze.

A ferociously fast start dictated the final podium in the Women’s Madison, with a group of five taking a lap.

“It started super-fast,” noted Gurley after the race, “a group of five got away and got the lap really quickly. It was unfortunate we missed that first move was we could have been in the top five. It was not a power issue missing out, it just started so quick. After missing that move we minimised damage and were in the mix.”

Boylan described a series of unfortunate incidents in the race that didn’t help – “we kept fighting after they got the lap, but I unclipped during a change and crashed down. Then I got a front wheel puncture which wasn’t ideal. But we managed to keep fighting to the end.”

“There were a few unfortunate, unforeseen things, but it was a better result than last year, and we did the best we could do, but you always want to do better,” added Gurley.

“Tonight, there were 17 teams competing – that’s 34 riders on the track. In a lot of the smaller events that we do there are maybe 12 teams. That adds another element to it,” said Gurley, “the Worlds is always a step up, it’s always the hardest race of the year – everybody brings their A game.”

Gurley is in action again today in the Points Race, and she is already looking forward to it – “I want to give it a good go. It’s a nice long race, it suits my fitness. I want to go out there and do the best race I can do.”

In the Omnium, Felix English raced aggressively in the final Points race, lapping the field to gain twenty points. However, a second attempt for a lap was pulled back, and he had to settle for nineteenth, after finishing 16th in the Scratch Race, 17th in the Tempo and 22nd in the Elimination Race earlier in the day. 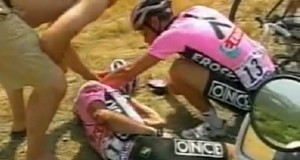 Joseba Beloki and the tricky descent of the Col de Manse