The Etixx – Quick-Step duo of Julian Alaphilippe and Tony Martin of Etixx-Quick Step rode a two-man time-trial today when they took off from the peloton not long after the flag was dropped on today’s stage of the Tour de France.

The pair built a six minute lead on the sixteenth stage from Moirans-en-Montagne to Berne as the race left France behind, heading out to Switzerland, which was being visited for the first time in four years, and the undulating terrain was sure of making the riders’ life difficult before the challenging finale, which included a brace of short climbs, pitching up to 7%, in the closing two kilometres.

As soon as Alaphilippe and Martin gained 20 seconds, BMC, Katusha and Lotto-Soudal took command of the bunch and tried to bring the Etixx – Quick-Step duo back, but they didn’t stand a chance. With every kilometre, the Tour de France rookie and his triple ITT World Champion teammate extended their lead, which eventually hit a maximum of six minutes.

Behind, four men attacked from the pack and tried to join Alaphilippe and Martin, but they couldn’t get any closer than 1’30” on the two before being reabsorbed by the peloton, which started to ride full gas inside the final 100 kilometres of the day.

The two continued to power along and make sure that if they go down it would be without having any regret whatsoever, making it tough for the chasers.

In Neuchatel, the town where current Etixx – Quick-Step sport director Tom Steels won a Tour de France stage back in 1998, Alaphilippe and Martin were still at the front, but their gap began to drop significantly once Bern loomed at the horizon.

After reeling them in, the peloton stayed compact until the finish, where it split, as the fight for victory became really fierce. Peter Sagan (Tinkoff) won, beating Alexander Kristoff (Katusha) and Sondre Holst Enger (IAM Cycling), whilst Dan Martin came with the yellow jersey group and will now go into the last rest day sitting in 9th place overall.

At the end of the day, the plaudits belonged not only to the winner, but also to Julian Alaphilippe and Tony Martin, who made sure of adding a pinch of excitement to stage 16. Their unique action, not seen in recent history at the Tour de France or in any other race for that matter, netted them a visit to the podium, where they were rewarded with the prize for the most aggressive rider of the day, a first in the long and rich history of the Grande Boucle.

“It didn’t work out for the victory, but it’s a big honour to be here with Julian and receive this award. Knowing that this wasn’t a stage for the sprinters, we tried to do something crazy today, as there was a chance to pull it off. Ok, it was also risky, but if you don’t risk, you don’t win”, said Tony Martin, who is no stranger to breakaways, some of his finest victories coming after giving the slip to the bunch.

“Sometimes it’s not just about winning, but also about getting a nice performance and leaving something behind. We gave everything and even though it didn’t pay off, we are content, because we enjoyed it. Being on the podium is always nice and we are happy with this small celebration we are having.”

For Julian Alaphilippe, this was the second consecutive stage he spent in the escape. After a mechanical prevented him from fighting for victory on Sunday, the 24-year-old tried to shrug off that disappointment by going again up the road: “I wanted to leave yesterday behind, so together with Tony I went in the break. It wasn’t easy, as I suffered a lot.”

“You can’t even imagine how hard it was, but I was motivated by his fantastic ride. I don’t know how he does it, but he’s really incredible. Tony showed his class and what a huge champion he is, and I have learned a lot from him in this stage. We didn’t get the win, but it was a great day for us. We are very proud and I’m sure we will remember this day for a long time.” 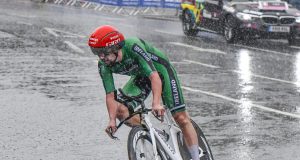