Cycling Team Jo Piels have confirmed that Gijs Verdick has passed away following on from two cardiac arrests he suffered at the Carpathian Couriers Race in Poland last week.

The 21 year-old rider was placed in an artificial coma following on from the cardiac arrests and flown back on Sunday to Isala Hospital in Zwolle, Netherlands where he died on Monday.

The statement from his team was as follows:

A week ago in Poland, Gijs twice suffered a cardiac arrest. The situation was very worrying and extremely critical. Gijs was artificially kept in a coma and on Sunday flew back from Tarnów (Poland) to the Netherlands and then transferred to the Isala Hospital in Zwolle. On Monday Gijs passed away. The family has indicated that Gijs’ organs will be donated to save other lives.

We are very touched by this loss and very sad for the whole team, it is unreal what happened. Gijs’ transition to Cycling Team Jo Piels was the dream to come true one step higher.

Gijs was a fine boy for racing and we will miss him enormously. Our sympathy goes out to the family, we wish you a lot of power and strength during the processing of this loss.” 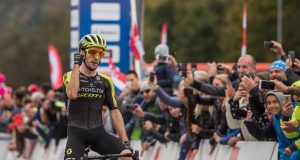