The Giro d’Italia returned to its homeland today after the opening three days in the Netherlands and it proved to be a good day for Team Sky as Nicolas Roche, Mikel Landa and David Lopez finished in a select group of riders at the end with Roche finishing in 10th place. This was enough to push the Irishman up to 9th place on GC.

Today’s fourth stage took the riders from Catanzaro to Praia a Mare and included a number of climbs en route including the final climb of Via del Fortino which topped out just eight kilometres from the finish with a maximum gradient of 18%.

Today’s course proved too difficult for race leader Marcel Kittel who finished over eight minutes down on the leaders and relinquished his pink jersey.

Diego Ulissi (Lampre-Merida) attacked towards the end to take the stage victory by five seconds from stage one winner Tom Dumoulin which allowed the Dutchman to reclaim the maglia rosa he’d lost to Marcel Kittel on stage three.

Steven Kruijswijk (Team LottoNL-Jumbo) finished in third with Alejandro Valverde (Movistar) winning the sprint for fourth place in the small group which contained the other race favourites including Landa and Vincenzo Nibali (Astana).

“It was a very fast stage,” explained Team Sky Directeur Sportif Dario Cioni after the stage. “Nippo [Vini Fantini] weren’t happy with the composition of that early breakaway so they chased for a long time – I think the average speed for the first hour was around 50km/h.”

“It was also very warm and the last 75km were pretty difficult. It’s always hard for riders after a rest day as well, so all those factors combined to make it more selective than we expected.

“When the attacks started it was good to always have someone up the road. Sebastian and David got themselves into that front group and we kept David there as we didn’t know if it would stay away. In the end only Ulissi survived and he did a really good ride to get his win.”

“Back in the peloton, Nico and Mikel rode well and made it look easy when they were closing the gaps on the climbs, and then Nico did very good to get into the top 10.”

The Giro continues tomorrow with a 233-kilometre stage from Praia a Mare to Benevento. 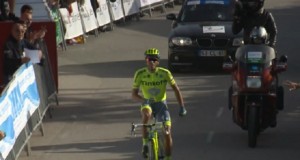