Nicolas Roche (Team Sky) put in an impressive performance today by claiming ninth place in Clasica Ciclista San Sebastian – his final race before travelling to Brazil to line up in the Olympic Road Race.

It was on the last of the race’s six categorised climbs where the race really blew apart and four riders went clear towards the top of Murgil Bidea – Bauke Mollema (Trek-Segafredo), Joaquim Rodriguez (Katusha), Alejandro Valverde (Movistar), and Tony Gallopin (Lotto-Soudal).

Roche was in a group just behind the four leaders but they were unable to close the gap to the lead group.

Cresting the top of the climb, Mollema seized his chance and attacked on his own. His lead hovered between 8 and 12 seconds but the three chasers were unable to bring him back with Rodriguez sitting on as they headed into the final kilometres. This reluctance to cooperate enabled Mollema to stay clear.

Gallopin finished next ahead of Valverde with Rodriquez settling for fourth in his last appearance at San Sebastian.

This performance will give Roche confidence ahead of next week’s Olympic Road Race and his only team-mate in Rio – Dan Martin (Etixx-Quick Step) – also had a solid performance as he finished in 12th place. 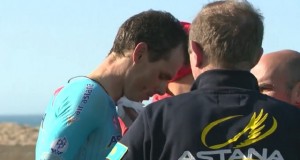 Luis Leon Sanchez crashes out of the Tour of Algarve...