Quick Step Floors have confirmed their squad for next year which will comprise 27 riders. Amongst their new signings are Michael Mørkøv and Elia Viviani while Dan Martin (UAE Team Emirates), Marcel Kittel (Team Katusha Alpecin) and Matteo Trentin (ORICA-Scott) depart.

The 56 UCI wins scored by Quick-Step Floors in the past season saw the outfit managed by Patrick Lefevere take its all-time tally to 615 wins.

During the transfer season, Quick-Step Floors retained many of the riders who formed its core in 2017, while at the same time continuing to invest in youth development, as shown by the four neo-pros who join the team for 2018.

Next year, the roster will be made up of 27 riders from 13 different countries. It will be one of the youngest squads in the World Tour, with nearly half of the riders still in their early 20s.

Patrick Lefevere is optimistic and ready for this new challenge which the 2018 season shapes up to be.

“We have many new riders, some of them very young, but we look with the same confidence and excitement to the new season which looms just around the corner. Last season was a spectacular one and next year we’ll try to be again in the mix, be it Classics or stage races, and replicate many of the great 2017 wins”, said the Quick-Step Floors’ CEO.

“The riders and the staff are always working hard, they know that getting to the top and staying there it’s no easy task, but they are all professionals and very passionate about what they are doing, and seeing their relentless dedication makes me very optimistic and eager about taking on the new season”, concluded Lefevere. 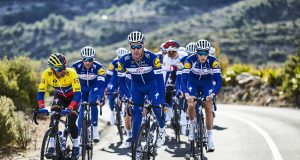