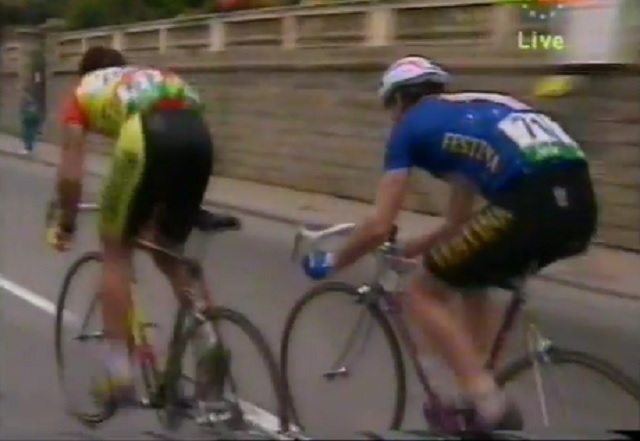 Prior to Milan-San Remo in 1992, the clear favourite for the win was the Italian Moreno Argentin who earlier that week had won three consecutive stages of Tirreno-Adriatico.

It was one of the few big one-day races missing from his palmares as he had already taken victory in the World Road Race Championships, Liège–Bastogne–Liège, Giro di Lombardia, Tour of Flanders and La Flèche Wallonne.

However, in what was one of the most memorable finishes to a classic in the past few decades, Argentin was beaten by Sean Kelly after a super descent of the Poggio by the Irishman and being caught and subsequently beaten by Kelly in the sprint finish.

Much has been written from Kelly’s perspective about the win, but what were Argentin’s thoughts after the finish? He was interviewed by the Italian newspaper La Repubblica afterwards and provided a number of excuses as to why he felt he was beaten.

“When I saw the banner for the last kilometre I was just thinking of having made it,” Argentin said. “Instead Kelly suddenly popped up behind me. I had not seen him, otherwise I would have reacted in time.

“I didn’t see him until the last (moments), when we were almost 600 metres from the finish,” he confirmed. “With all the motorbikes behind, I couldn’t see him. I guess he was also aided by them.”

“On the hill, when I attacked, I was immediately caught up behind the photographers’ motorbikes. I had to slow down and then attack again. You all saw what happened.”

However another Italian classics specialist had a different opinion as to why Argentin lost. “He went too slow downhill,” said Francesco Moser succinctly, winner of the race in 1984.

When it was mentioned that he had been beaten by one of the oldest riders in the peloton, as Kelly was 35 years-old at the time, Argentin pointed out that although Kelly might be one of the oldest, he was “also one of the most clever.”

It had been Argentin’s best chance to win Milan-San Remo and he would never get to add it to his palmares. 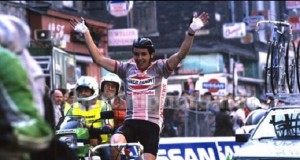 Kelly and Roche triumphant in the 1985 Nissan Classic