Ireland’s Lara Gillespie has won bronze in the Individual Pursuit at the UCI Junior Track World Championships in Frankfurt, Germany.

The Wicklow teenager set a new Junior National Record of 2:20:438 during qualification, averaging 51.268kpm for the 2000m time trial. Gillespie then went up against Marii Milaeva of Russian in the race for bronze. She trailed by almost half a second at the halfway mark but measured her effort perfectly and ultimately claimed Ireland’s first medal at a Junior Track World Championships.

“I’m so happy, I can’t believe it,” Gillespie said. “The last few laps were pretty hard, they were pretty brutal but I worked so hard for this all year so I’m really happy”. 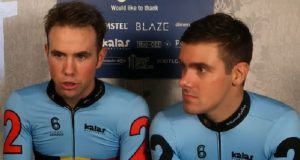