Alaphilippe blew the second stage apart on San Pelaio, the 3.3km-long climb averaging 8.1% which featured in the last ten kilometres, before sprinting from a four-man group to a convincing victory in Bermeo, a town which made its return after a 37-year hiatus.

“It’s crazy! I was already happy with my win on stage 1 and having the yellow jersey on my shoulders, so to take another victory is just incredible,” said Alaphilippe. “We’re on a fantastic run of success, we’re winning everywhere and seeing how the team performs only gives us more confidence. Two victories in two days and three jerseys it’s a great harvest for our squad, but we don’t want to stop here.”

Stage 2 included numerous climbs and got off to a fast and aggressive start, with the crosswinds splitting the field after 30 kilometres and forcing a serious chase from the second group, who at one point was over a minute in arrears. Race leader Julian Alaphilippe and best young rider Enric Mas were at all times at the front, protected by their Quick-Step Floors teammates, who controlled the race behind the large breakaway group, which was pegged back by the time they hit the insane slopes of San Pelaio.

On the double-digit gradients, Alaphilippe and Mas put in two searing attacks to soften up their rivals and their efforts paid dividends, with just a handful of riders being capable of responding. Less than 500 metres from the top, Alaphilippe dug deep again, taking three riders with him onto the descent: Gorka Izagirre (Bahrain-Merida), Mikel Landa (Movistar) and Primoz Roglic (LottoNL-Jumbo).

The quartet stretched out their advantage before the tough and complicated finish in Bermeo, which included a 11% ramp and a tricky corner, where Alaphilippe came out on top again, securing his second victory and becoming the first Frenchman in 19 years to take back-to-back wins at Vuelta al Pais Vasco.

“The stage was on from the start and the crosswinds made it even more brutal, but fortunately I have a great team around me, who set an incredible pace at the front of the bunch, keeping the attackers on a leash, and a very strong Enric, who played a big role in my victory,” said Alaphilippe.

“Unlike yesterday, I had no idea on the final, but stayed calm and confident in my legs and sprint. Despite taking some more bonus seconds and increasing my advantage in the GC, I’m not changing my goal and will continue to take it day by day.” 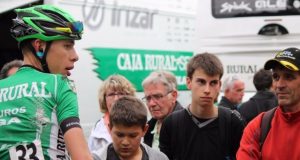