One of the literary giants of the 20th century, Ernest Hemingway, first moved to Europe during World War One and during his stay on the continent, he came to really appreciate bicycle racing, in particular, six-day races in Paris. He even makes a reference to the Tour of the Basque Country in his 1926 novel The Sun Also Rises.

The 1925 edition described was won by Belgian rider Auguste Verdyck who beat compatriot Joseph Be by over five minutes with Frenchman Marcel Bidot in third. The 670-kilometre race consisted of just three stages and started and finished in Bilbao.

This is Hemingway’s evocative description of the race.

There was a bicycle-race on, the Tour du Pays Basque, and the riders were stopping that night in San Sebastian.

In the dining-room, at one side, there was a long table of bicycle-riders, eating with their trainers and managers. They were all French and Belgians, and paid close attention to their meal, but they were having a good time. At the head of the table were two good-looking French girls, with much Rue du Faubourg Montmartre chic. I could not make out whom they belonged to. They all spoke in slang at the long table and there were many private jokes and some jokes at the far end that were not repeated when the girls asked to hear them.

The next morning at five o’clock the race resumed with the last lap, San Sebastian-Bilbao. The bicycle- riders drank much wine, and were burned and browned by the sun. They did not take the race seriously except among them-selves. They had raced among themselves so often that it did not make much difference who won. Especially in a foreign country. The money could be arranged.

The man who had a matter of two minutes lead in the race had an attack of boils, which were very painful. He sat on the small of his back. His neck was very red and the blond hairs were sunburned. The other riders joked him about his boils. He tapped on the table with his fork.

‘Listen,’ he said, ‘tomorrow my nose is so tight on the handle- bars that the only thing touches those boils is a lovely breeze.’

One of the girls looked at him down the table, and he grinned and turned red. The Spaniards, they said, did not know how to pedal.

I had coffee out on the terrasse with the team manager of one of the big bicycle manufacturers. He said it had been a very pleasant race, and would have been worth watching if Bottecchia had not abandoned it at Pamplona. The dust had been bad, but in Spain the roads were better than in France. Bicycle road-racing was the only sport in the world, he said. Had I ever followed the Tour de France? Only in the papers. The Tour de France was the greatest sporting event in the world. Following and organizing the road races had made him know France. Few people know France. All spring and all summer and all fall he spent on the road with bicycle road-racers. Look at the number of motor-cars now that followed the riders from town to town in a road race. It was a rich country and more sportif every year. It would be the most sportif country in the world. It was bicycle road-racing did it.

That and football. He knew France. La France Sportive. He knew road-racing. We had a cognac. After all, though, it wasn’t bad to get back to Paris. There is only one Paname. In all the world, that is. Paris is the town the most sportif in the world. Did I know the Chope de Negre? Did I not. I would see him there some time. I certainly would. We would drink another fine together. We certainly would. They started at six o’clock less a quarter in the morning. Would I be up for the depart? I would certainly try to. Would I like him to call me? It was very interesting. I would leave a call at the desk. He would not mind calling me. I could not let him take the trouble. I would leave a call at the desk. We said good-bye until the next morning.

In the morning when I awoke the bicycle-riders and their following cars had been on the road for three hours. I had coffee and the papers in bed and then dressed and took my bathing-suit down to the beach. 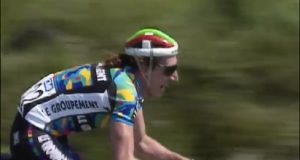 Robert Millar’s 1995 National Championships win on the Isle of Man...