Bahrain Merida have announced the signing of Austrian Hermann Pernsteiner, an experienced mountain biker, who will join their team for the 2018 season.

27 year-old Pernsteiner’s first international success was in 2011 when he took the silver medal in the U23 Marathon Race at the European Championship. In 2015 he got his first professional contract as a mountain biker at the German team Centurion Vaude. In 2016 and 2017 he won the Bike Transalp stage race and the Trans Schwarzwald.

Pernsteiner took stage victories at some big MTB stage races including Alpentour, Brasil Ride and Bike Transalp and he also won the silver medal at National Austrian MTB Championships in 2015 and 2017.

In 2016 the Austrian Continental Team, Amplatz BMC, invited him to try road racing at Tour of Slovenia and Tour of Austria. He finished 16th in Slovenia and two weeks later 6th at Tour of Austria, also winning the jersey as the best Austrian rider. After some successful road races in 2017, he is fully switching from MTB to the road with Bahrain Merida.

Brent Copeland, General Manager of the team commented on signing Pernsteiner: “Giving an opportunity to a talented cyclist such as Hermann is something we at Bahrain Merida take a lot of pride in. Hermann has so far mainly shown his talent on the MTB. However, we believe he has a huge amount of margin to improve on the road. We have been keeping a close eye on him since our coaching staff did some physiological tests on him earlier in the year. We were very pleasantly surprised with the results. Our immediate thought was what he could do on the road with such impressive results and decided to give him this opportunity.

“We then saw he got two top 10 placings in GC standings which proved to back up what our coaching staff had told us. We are very excited to see Hermann riding in our colours next year and can’t wait to see him showing us what his pure climbing talent can do in the mountains. We welcome him to the team and are confident he will show the road cycling world what he has already shown the MTB world.”

After signing with the team, Pernsteiner said: “I am really happy and pleased that I will start my professional road career with Bahrain Merida Team. It is one of the best teams in the world, with big names in it. It is a big step in my career. The team is a very young one with a great future ahead. I am highly motivated for my debut in Bahrain Merida jersey. As a climber, I think I can help the team in the mountains and on stage races. I also want to develop further on the physical and tactical field to accomplish better results for Bahrain Merida in the future.“ 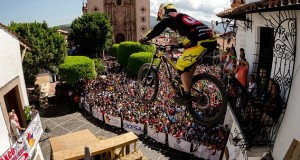 Great GoPro footage from Rémy Métailler in the Taxco Downhill