Yves Lampaert (Quick-Step Floors) was the victor on stage 2 of the Vuelta a España, between Nîmes and Gruissan on a pan flat course exposed to crosswinds, which saw all the teams stay alert throughout the day, not allowing any breakaway to form.

Quick-Step Floors were the main instigators towards the end of the stage, as they moved to the front just ahead of the penultimate roundabout of the day, inside the last 2000 metres, with the likes of Niki Terpstra Julian Alaphilippe, Yves Lampaert and Matteo Trentin piling on the pressure and their efforts in the strong crosswinds fractured the peloton.

As chaos ensued behind, Quick-Step Floors continued to ride hard and cause splits, only a handful of men being capable of taking their wheel. Then, under the flamme rouge, Lampaerts attacked and put his impressive time trial skills to work, powering away and holding onto that advantage until the finish line, as behind teammate Matteo Trentin helped this move stick by disrupting any chase attempt, before sprinting to second place ahead of Adam Blythe (Aqua Blue Sport).

Lampaerts’ maiden Grand Tour victory is the fourth for the 26-year-old rider from Izegem in what can already be labeled as his finest season to date, one in which he conquered also Dwars door Vlaanderen, Gullegem Koerse and the National ITT Championships.

“Our ideal scenario was to create an echelon long before the finish, but in case this didn’t happen, then we had a back-up plan: to try again in the last kilometres,” an ecstatic Yves Lampaert said in Gruissan.

“We wanted to deliver Matteo in a perfect position to sprint for the win, but once we splintered the peloton and opened a gap in the final kilometre, we improvised a bit, as he told me to go, and that’s what I did. I am extremely happy our plan worked to perfection.

The 26-year-old became the first Belgian rider since 2010 to don the leader’s jersey at the Vuelta a España and also took the green jersey with the team leading the team standings, all results which brought huge joy to

“The team’s first goal of the day was to help Matteo take three seconds at the intermediate sprint, knowing these would have helped him get closer in the GC,” said sport director Rik Van Slycke.

“This was important, because with those bonifications there was a fair chance for him to seize the leader’s jersey at the end of the stage, providing he would have finished in the first two.”

“A few teams tried to split the group during the stage, but it was too early. You need to know when to do that and wait for the right moment. For us, that moment came with two kilometres remaining, once Niki took the reins and went full gas. Then Julian took over and pushed hard, while Matteo played it really smart, leaving a gap behind Yves and allowing him to break clear. It was a tactical masterpiece. To win stages in all Grand Tours this year is sensational and overwhelming! I am very proud of the boys and of the entire team”, Van Slycke concluded. 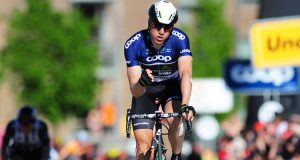