Mikel Nieve of Team Sky took a solo win on the mountainous 13th stage after being part of a large breakaway group which had broken clear early on the stage.

Nieve went clear on the penultimate climb of the day with 33 kilometres remaining and beat Giovanni Visconti (Movistar) into second place by 43 seconds in Cividale del Friuli.

The main contenders finished a further 34″ back with Vincenzo Nibali (Astana) beating Alejandro Valverde (Movistar) to the four bonus seconds on offer for third place.

Previous race leader Bob Jungels (Etixx – Quick-Step) was dropped on the final climb and finished a further 50 seconds behind resulting in Amador (Movistar), who finished in the Nibali group moving into first in the general classification and opening up a 26-second lead over second-placed Jungels.

Thanks to his bonus seconds, Nibali climbs to third ahead of Valverde and Steven Kruijswijk (LottoNL-Jumbo) in fourth and fifth respectively.

Andrey Amador – “We knew today’s was going to be an important stage, the first real approach into the mountains. We were sort of expecting attacks when it came to the GC fight, yet we wanted to get into the break to stay calm, and both Visco, José Joaquín and Jasha fulfilled that task in the best possible way. Alejandro proved to be impressively strong on the climbs; I kept my own pace and always stayed with the main field, but into the final climb of Valle, I just lacked a bit of energy, a couple of kilometers before the summit, when I lost contact. Still, and knowing myself well, I knew I could bridge back into the descent to wear this jersey.

I’m so happy to have got to this point. I’m not a pure climber by any means; that’s why I consider this as a tremendous feat, which I’m really proud of. The most important thing for the team is keeping all chances intact with Alejandro for the overall. Tomorrow’s stage will be one of the hardest in this Giro, the real key to the race together with Sunday’s mountain TT. For the time being, we must remain thinking day-by-day, enjoy the moment and wear this pink jersey with pride; it’s something massive for my career.

Costa Rica is a small country, yet with a big heart. When there’s only one ‘tico’ supporting me in a race, it feels as if they were hundred. This jersey is a tribute to all of them. They’ve always supporting me, no matter if results were good or bad, and I just hope this serves as a boost of confidence for all the youngsters in our country: we’re talented enough to be up here with the top guys in Europe.” 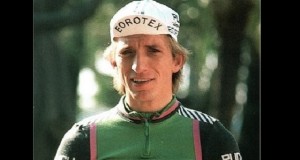 The 1979 Tour and the Fight for the Lanterne Rouge