Following on from the disappointing news that emerged yesterday that the Irish National Road Race Championships could no longer be held in the Phoenix Park close to Dublin city centre, the host club Orwell Wheelers have revealed that they are confident that despite the short notice, they can host the road races at an alternative location, possibly Wicklow.

The Garda Síochana announced in recent days that the club could not use the Phoenix Park as previously planned on the weekend of the 23-26 June. Vice President of the US Joe Biden visits Ireland from June 21-25and this will have a major impact on the Garda resources available during that time.

Race director Stephen O’Shea is currently working on identifying an alternative route and he’s hopeful of revealing a new circuit for the championships in the forthcoming days.

The news that they can no longer hold the races in the Park has caused some big challenges, and amongst these is the reduction in funding available for the race. If the race had been hosted in the park, the club had been hopeful of receiving a grant to help cover the costs.

Despite this setback though, O’Shea does see an opportunity. “Holding the race elsewhere means we’re not restricted as to what advertising banners we can use. If we had held it in the Park, we wouldn’t have had this opportunity,” he said.

The race will be the only time that Ireland’s World Tour riders will race in their home country and with big crowds expected, it offers potential sponsors a great opportunity. O’Shea is keen to hear from any interested companies to talk about available options for helping to support the race.

“We’re struggling with funding now that we won’t receive the grant we had hoped for,” says O’Shea. “We’d really like to get the word out that we’re looking for sponsorship as we don’t want to have increase race entry fees.”

Ironically enough, the club were going to put the call out to volunteers from the club to help with the race using the iconic Uncle Sam “I Want You” poster. However, with the visit of Joe Biden disrupting their plans, they’ve decided not to use that particular image.

The Championships will take place over four days and will see races for Senior Men, Women, U23 Men, M40 Men. M50 men and M60 Men. The Women’s race will incorporate a demonstration event for Masters Women.

If you’re interested in sponsoring one of Ireland’s showcase cycling events, please feel free to contact Stephen O’Shea – 083-812 8808 or IrishCyclingChampsOrwell2016@gmail.com 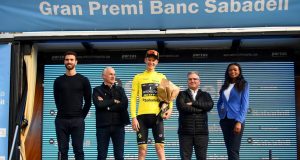 Jack Haig takes over race lead at the Volta a la...