The Trek-Segafredo women’s team claimed the opening team time trial at the 31st Giro d’Italia Internazionale Femminile, informally known as the Giro Rosa, and laid claim to the first leader’s jersey of the nine-day race.

Italian Elisa Longo Borghini was the first of the team across the finish line and will wear the maglia rosa into Stage two Saturday, her first-ever pink leader’s jersey.

“It was not planned that I cross the line first, it was a team effort and we don’t care who crosses the line first. It just happened that Ellen (van Dijk) swung off and I was the last rider taking the pull through the last roundabout. It was really unplanned. Maybe someone can say that having the maglia rosa the first day is not good, but for me it’s a big emotion,” said Longo Borghini.

“It’s an emotional moment for me, although I don’t fully realize it yet since I have never been in this pink jersey, and never been in such a good environment in this team. I want to thank the entire team and everyone who was close to me during the lockdown. Now we have to take it day by day and keep our feet on the ground. I am not a rider that wins a lot, so I enjoy the victories and get very emotional.”

It was a close contest between the top three teams. The Trek-Segafredo team (Elisa Longo Borghini, Ellen van Dijk, Ruth Winder, Audrey Cordon-Ragot, Lizzie Deignan, Tayler Wiles) clocked a time of 20 minutes and 5 seconds for the 16.8-kilometre flat course, three seconds ahead of Boels-Dolmans Cycling team and five in front of Mitchelton-Scott.

“We knew we had to have a fast start because there was a head and head-crosswind, and we could gain time and make the biggest difference in the beginning. We had a solid start and managed to hold this difference to the other teams,” explained Longo Borghini.

“It’s special; we have been targeting this TTT because it suited the team. It was a team win, and I wish I could share my maglia rosa with my five teammates – there should be six maglia rosas tomorrow – because without them I would not have this.” 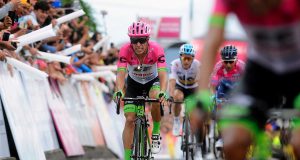 EF Education First – Drapac focused on GC at Tour of...