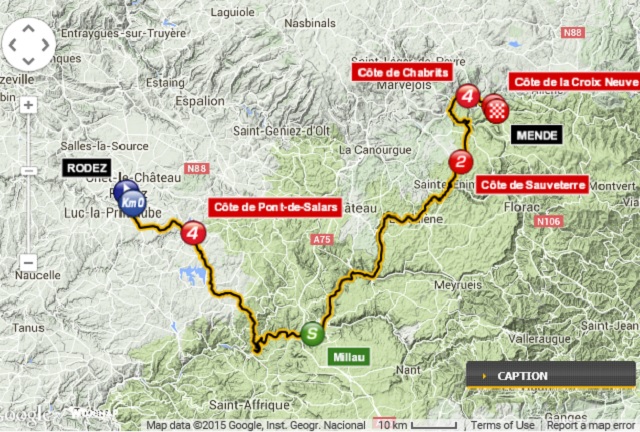 Today’s stage takes the riders from Rodez to Mende and features some spectacular scenery along the way including the Gorges du Tarn and the Millau Viaduct. Once again, we can expect to see a breakaway trying to form early on, in the hope that teams behind aren’t interested in chasing. It will be one of the few opportunities for breakaway specialists.

The stage features a number of climbs along the route. The riders will have to tackle a Category 4 climb, the Côte de Pont-de-Salars not long after the start and an uncategorised climb, the Col de Vernhette after 40 kilometres, before moving to flatter terrain.

The final third of the race is where riders are really going to struggle. After 146 kilometres, the race will take on the Category Two Côte de Sauveterre followed by the Category Four climb, the Côte de Chabrits. A lot of tired riders are going to be suffering in the heat today and the bunch could splinter on these climbs.

The final climb to the airfield at Mende, the Côte de la Croix-Neuve, is one of the steepest of the race. It’s only three kilometres long but has an average gradient of 10%. Alberto Contador (Tinkoff-Saxo) has won on this climb previously, in Paris-Nice, so it’s a climb that suits him. His compatriot, Alejandro Valverde (Movistar), is also likely to be to the fore at the finish.

Joaquin Rodriguez is obviously in good form and will be confident of taking a hat-trick of stage wins after his wins at the Mur de Huy and Plateau de Beille. We can also expect to see Chris Froome (Team Sky) challenge for the win. There may be some small time gaps emerging between the GC contenders on the final climb. 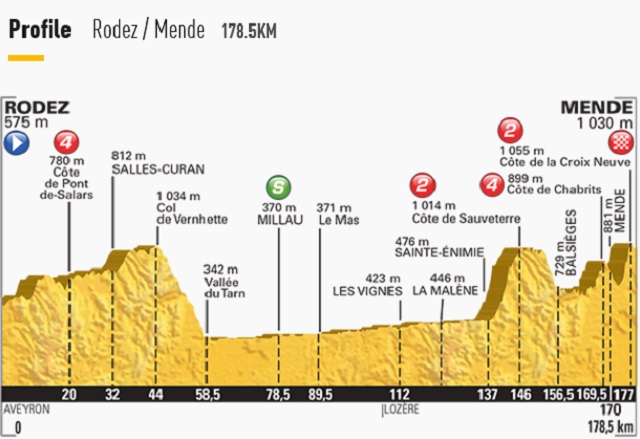