As Stefan Denifl forged ahead to win yesterday’s 17th stage of La Vuelta to Los Machucos, the GC battle went on behind with race leader Chris Froome losing time to some of his rivals. Amongst those to gain time on Froome was Vincenzo Nibali who finished 42″ ahead of the Briton.

The Italian rider now sits 1’16” behind Froome overall and he explained afterwards that with a number of difficult stages in the last few days of the race, he is going to continue to try to win

“Tremendous, a real climb,” said Nibali after the stage. “It’s like Zoncolan in Italy or the Bola do mundo here in Spain. It’s hard to forget about this ascent to Los Machucos.”

“At the beginning, I did not feel great, but getting up I found a good pace. In the final with Ilnur Zakarin we insisted and managed to retrieve forty seconds. Froome is fine and has a great team with him, but there are still a couple of difficult stages and I will try to win”.

Head of Performance Paolo Slongo said: “Today’s stage and Angliru next Saturday have a common feature: your legs are more important instead of having a good team. Probably Froome paid more than Vincenzo yesterday’s time trial ”

Today’s 18th stage from Suances to Santo Toribio de Liebana over 169 kilometres features a number of second and third category climbs with a challenging finale. 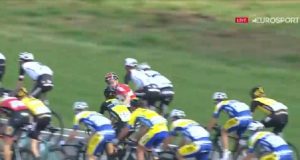