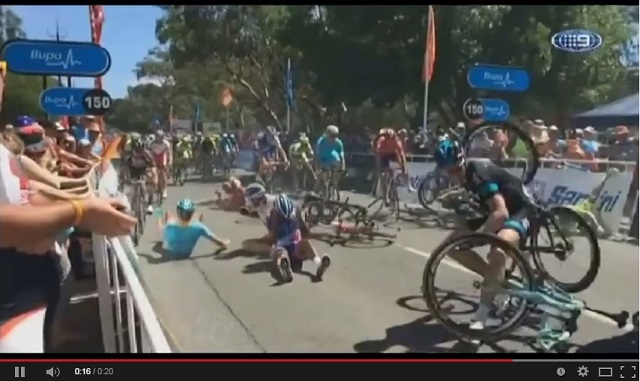 Earlier today, we posted the onboard camera footage of the crash at the end of today’s stage of the Tour Down Under. It was filmed from the bike of Frenchman Jeremy Roy (FDJ.fr) whereby he somehow managed to avoid going down.

Here’s the crash filmed from a different angle. In this footage, you can see Roy sneaking through on the left-hand side of the screen.

The incident happened when the riders were travelling at almost 70kph, and there were a number of riders badly hurt. Kenny Dehaes (Lotto-Soudal) caught his fingers in the spokes of his own wheel, and suffered some abrasions to the back of his leg. The Belgian rider received 25 stitches in three of his fingers and he had to abandon the race as a result of his injuries.

Jeremy Roy’s team mates Lorenzo Manzin and Olivier Le Gac were also forced to abandon the race. Drapac’s Travis Meyer was sent to hospital for x-rays after the stage, which showed that he fractured his hand in the incident.

This footage provides a better idea of the carnage involved. 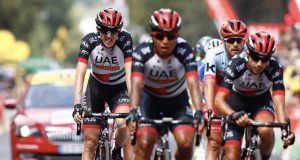 X-rays reveal no fractures for Dan Martin after crashing on stage...