After coming close to victory on stages 5 and 7, Bennett looked to be a great position to take the stage win which has so far eluded him after a great effort by his Bora-hansgrohe team in the closing stages, but it was Gaviria who proved fastest in the run to the line.

Today’s 229-kilometre stage from Forlì to Reggio Emilia, which is the longest of the race was marked as one for the sprinters and the teams of the fast men worked together to ensure that the early breakaway was never going to stay away. Bennett’s Bora-hansgrohe team, Quick Step Floors working for Fernando Gaviria, Orica-Scott for Caleb Ewan and Lotto-Soudal for Andre Greipel caught the three breakaway riders inside the final ten kilometres.

Bora-hansgrohe put in a tremendous effort in the closing kilometres to prevent any other attackers and keep Bennett in a great position. With two kilometres remaining, Lotto-Soudal and Quick Step Floors also came to the front to keep their men in position.

A late attack by Eugert Zhupa (Wilier Triestina – Selle Italia) was nullified by Bennett’s team but in the closing metres, it was Gaviria who proved strongest, taking his third stage win of the race.

Tomorrow will offer the final opportunity for the sprinters at a stage victory. The thirteenth stage takes the riders over a flat 167-kilometre parcours from Reggio Emilia to Tortona before the race returns to the mountains on Saturday. 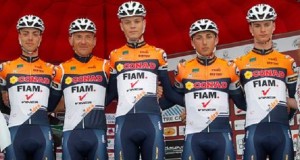 US Diabetic Team and Strong Italian Squad Confirmed for An Post...