In the opening months of the 1984 season, Sean Kelly had an incredible run of results which would prompt him to later describe the first half of the season as the best period of his career.

Amongst the wins he took that spring were a third consecutive Paris-Nice, the Tour of the Basque Country, Criterium International and the first of two victories in Paris-Roubaix.

Paris-Roubaix was run off in particularly muddy conditions that year and Kelly stamped his authority on the race with 45 kilometres to go when he chased after two riders out front, Gregor Braun and Alain Bondue of the La Redoute team.

Kelly had originally told his Directeur Sportif Jean De Gribaldy with eighty kilometres remaining that he wanted to attack, but the wily Frenchman told him to be patient.

Rudy Rogiers was the only rider to catch up to Kelly and the pair chased down the La Redoute duo. Braun was the first to be dropped with Bondue then crashing.

Linda Kelly, Sean’s wife was making a rare appearance at one of his races that day, and as outlined in his autobiography Hunger, she stayed in the car at the velodrome knitting, as she was too nervous to watch.

It was just Kelly and Rogiers who sprinted for the win at the finish on the Roubaix velodrome and Kelly easily won the sprint.

“I had been fortunate,” said Kelly afterwards. “I was covered in mud and my whole body ached, but I had not suffered a puncture or crash all day. The gods of Paris-Roubaix had smiled on me.”

Watch the final two hours of the race here: 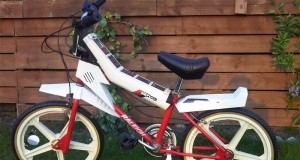