Dan Martin (Quick Step Floors) won today’s second stage of the Volta ao Algarve from Lagoa to Alto da Foia and in doing so, also took the yellow jersey. Afterwards, he explained that he had checked out the climb earlier in the week and that preparation along with some excellent teamwork helped him to the win.

“It’s always difficult to win a race when people say you are the favourite, but I was lucky to have an incredible team around me,” he said afterwards.

“That was a fantastic teamwork, you could see that even Fernando, who was in yellow, rode in the wind for me. I arrived here on Sunday and went for a recon on Monday, so I knew the last climb and that it suited me. It was important to be at the front just as we started it, and the team delivered me in an excellent position.”

“Bottom end, it was a perfect day for us, and I got this nice win which is good for confidence. Tomorrow we’ll have an individual time trial, and I know that other riders are stronger in this discipline, but we will just see what happens”, said a happy Martin, congratulated at the finish by his wife Jess.

By emerging victorious on the second day of the Portuguese event, Martin also took over the red points jersey and the blue KOM jersey. On top of that, he also became the first Irish rider to score a stage win in Volta ao Algarve, which this year is running its 43rd edition. 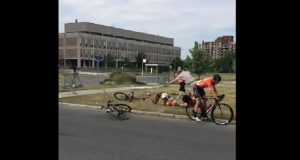 Canadian Championships won by the only rider to stay upright on...