Dan Martin (Quick Step Floors) has taken his first win of the season after a great ride on today’s second stage of the Volta ao Algarve em Bicicleta (2.HC) to the summit finish of Alto da Fóia.

Going into the stage, Martin’s team mate Fernando Gaviria held the lead, but due to the difficulty of the stage, the Argentinean wasn’t expected to keep the yellow jersey.

Today’s stage was expected to shake up the GC as the riders faced four categorised climbs on the 189.3-kilometre stage from Lagoa to Alto da Fóia. The final climb of the day was nine kilometres long with sections of up to 9.6%.

On the final climb, Quick Step Floors blew the race apart as Enric Mas and Zdenek Stybar put the pressure on. For a time, it was just three Quick Step riders in front, but Primož Roglič (LottoNL-Jumbo), Michal Kwiatkowski (Team Sky) and Amaro Antunes (W52-FC Porto-Porto Canal) bridged across.

With 4 kilometres remaining, Martin attacked and Roglič was the only rider to make it across. The Slovenian was next to attack but Martin was able to get back to his wheel. With three kilometres left, the duo held a 16 second lead over Kwiatkowski and Antunes.

Martin attacked again with 2 kilometres left, but once again was matched by Roglič. The duo were together going under the flamme rouge with Martin sitting in the prime position on Roglič’s wheel as Kwiatkowski chased behind.

The Irishman held his nerve and with 250 metres left, he opened up his sprint. Despite Roglič’s best efforts, Martin held him off with Kwiatkowski coming in 20″ down.

“It’s always difficult to win a race when people say you’re the favourite. It was incredible team work all day,” he said afterwards. “For me, it was really good for the confidence. Now as a team, we have twelve victories for the season.”

When asked about tomorrow’s time-trial he said: “I’ll do my best. There are other guys who are stronger than me, but we’ll just think about today.”

Martin also takes over the yellow jersey from Gaviria with Roglič in second. The race continues tomorrow with an 18-kilometre time-trial at Sagres. 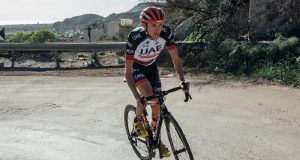 Dan Martin withdraws from Paris-Nice due to illness