The full route for the 2017 Tour de Yorkshire has been unveiled today at the Impressions Gallery in Bradford.

Welcome to Yorkshire Chief Executive Gary Verity led a packed press conference on Friday morning with the Amaury Sport Organisation’s Tour de France Director Christian Prudhomme. Scott Thwaites was one of many star riders in attendance along with Yorkshire cycling legends such as Brian Robinson, Malcolm Elliott and Denise Burton-Cole.

The third edition of the race takes place between 28-30 April 2017. It encompasses all four corners of the county and takes in Yorkshire’s two UNESCO World Heritage Sites at Fountains Abbey and Saltaire:

STAGE ONE: 173km –THE COAST AND WOLDS
BRIDLINGTON TO SCARBOROUGH Friday 28 April
The race takes the peloton from the coast through the Yorkshire Wolds, starting outside the refurbished Bridlington Spa and heading into Pocklington for the first intermediate sprint.

The classified climbs up the Côtes de Garrowby Hill and Goathland will get the legs pumping before the race hits the coastline again at Whitby where the riders will get a great view of the world-famous Abbey as they contest the second sprint of the day. The route continues on to Robin Hood’s Bay for the third and final climb and then it’s full steam into Scarborough for the now-legendary finish along North Bay. 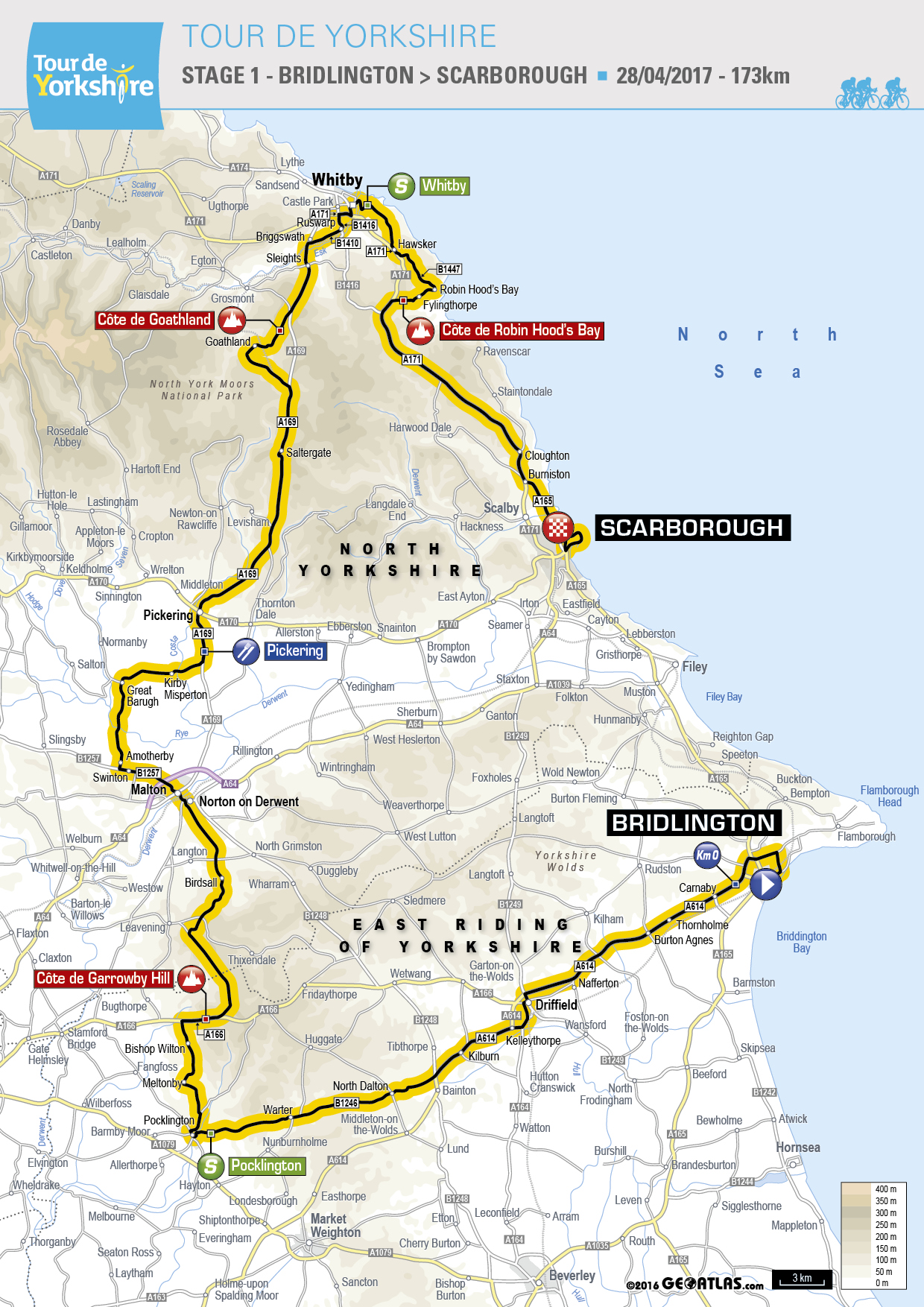 STAGE TWO: 122.5km – HISTORIC MARKET TOWNS
TADCASTER TO HARROGATE Saturday 29 April
Starting on Tadcaster bridge – which will be newly reopened following flood damage last Boxing Day – this stage takes the riders through some of Yorkshire’s finest market towns. They will venture into Knaresborough, where the first intermediate sprint points are up for grabs, and the day’s sole categorised climb comes on the fearsome Côte de Lofthouse before the descent into Masham.

It’s on to Ripon for the second intermediate sprint and the race will skirt the stunning Fountains Abbey before a fast approach to Harrogate. The action reaches its crescendo along Parliament Street, just as it did on the opening stage of the 2014 Tour de France. 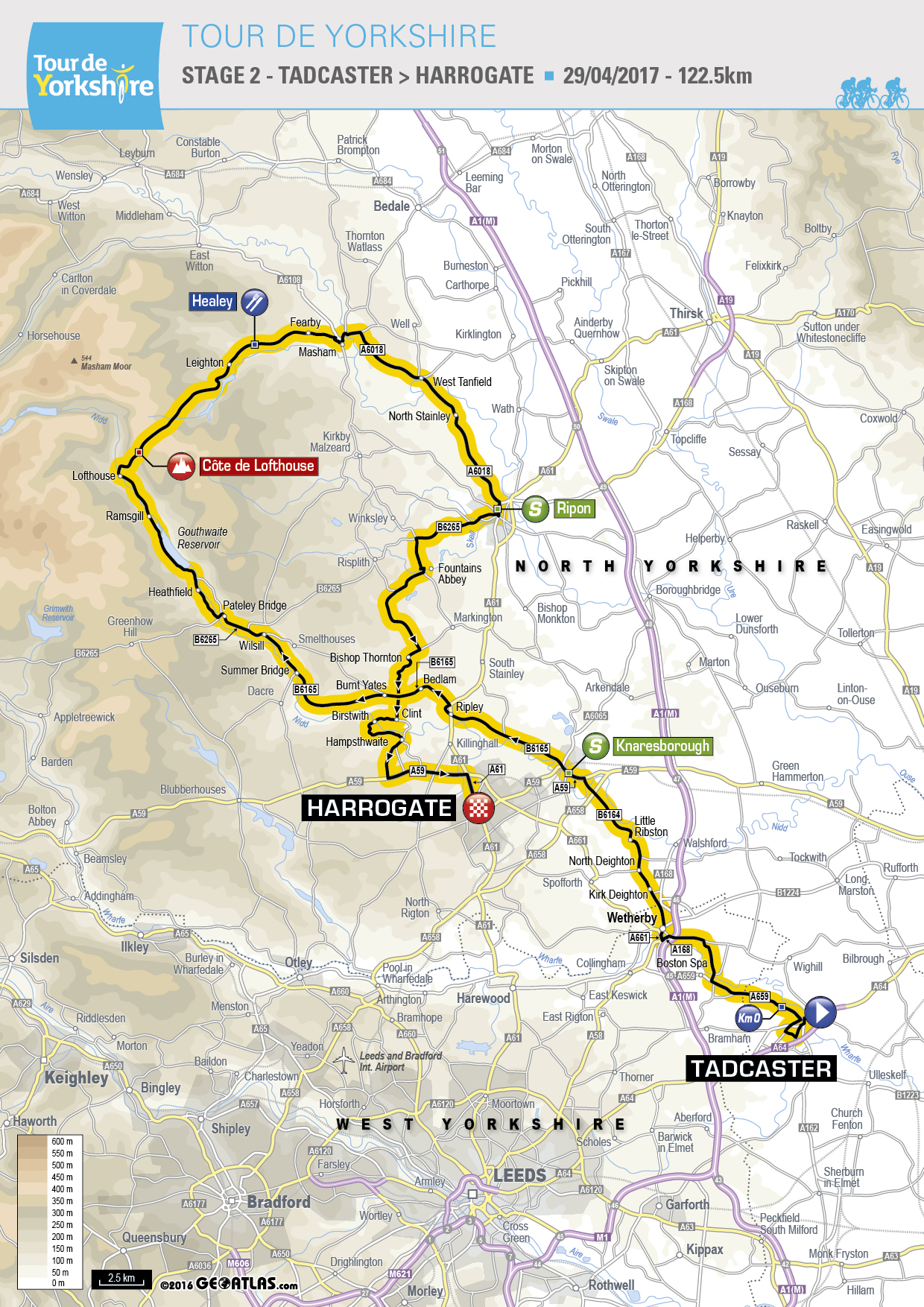 STAGE THREE: 194.5km – THE YORKSHIRE TERRIER
BRADFORD TO FOX VALLEY (SHEFFIELD) Sunday 30 April
Named The Yorkshire Terrier as this is the toughest stage in the history of the Tour de Yorkshire, riders will start at Bradford City Park before heading into Saltaire. The action then briefly joins the 2014 Tour de France route at Burley-in-Wharfedale before passing the majestic Bolton Abbey and into the Yorkshire Dales.

Skipton is the next town on the agenda, with the first of eight categorised climbs being contested on the Côte de Silsden. The following ascent comes on the cobbled rise up Haworth’s picturesque main street and another climb at Leeming must also be tackled before they face the infamous Côte de Shibden Wall.

This cobbled brute could see splits form before the intermediate sprint at Clifton. The race then traverses from West to South Yorkshire and into Penistone, and another sprint is on the cards at Stocksbridge before the riders embark on a torturous 22km finishing circuit that features no-less than four categorised climbs. These come at Deepcar, Wigtwizzle, Ewden Height and Midhopestones before the race reaches its climax at Fox Valley. 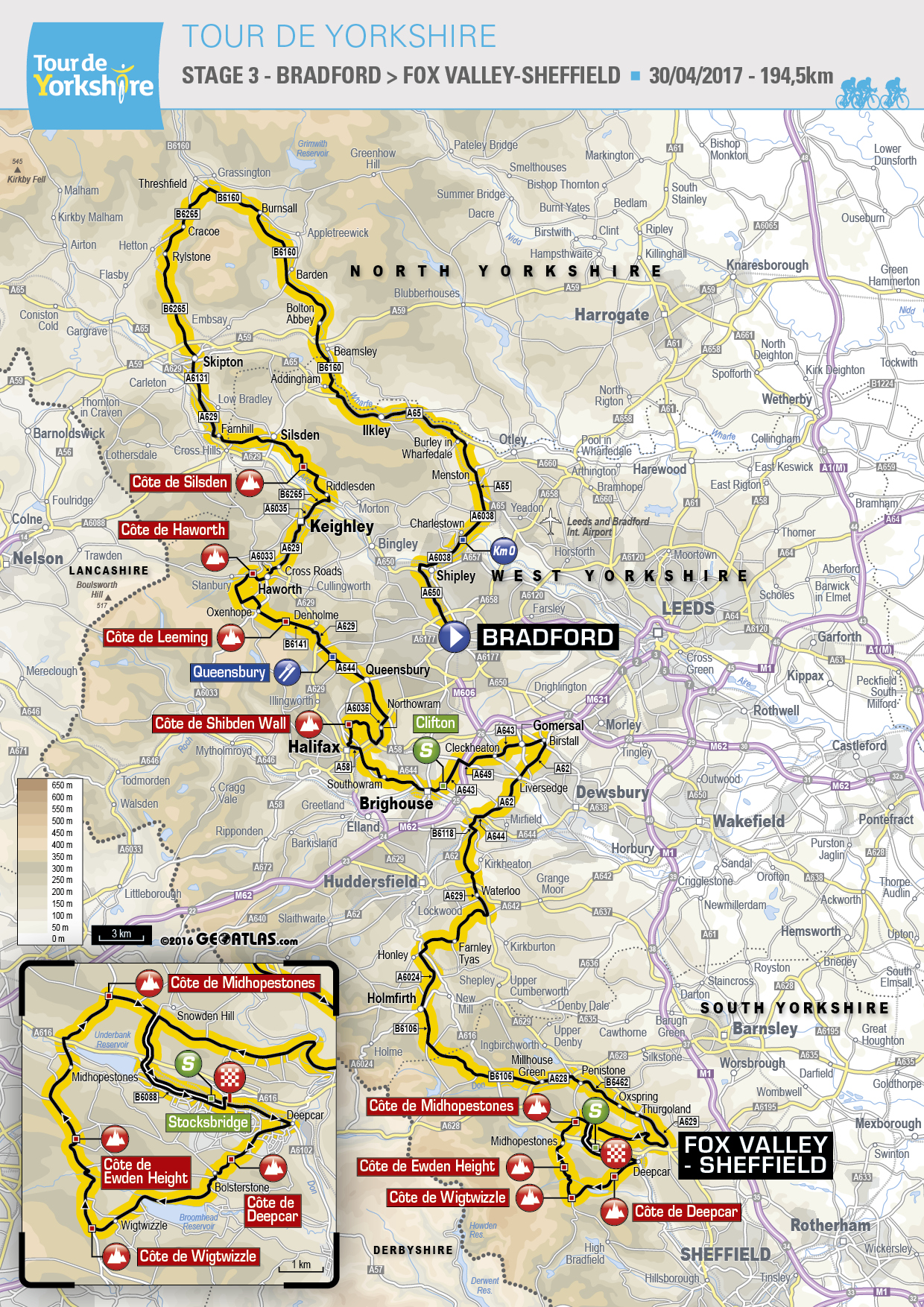 “Last year the race attracted 2 million spectators and generated £60 million for the local economy, and we’ll go from strength to strength again next year.

Christian Prudhomme said: “I always enjoy coming to Yorkshire and the county certainly knows how to put on a show. I am excited by what this year’s route has in store and am sure it will provide three days of fantastic racing.” 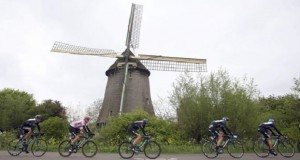 2016 Giro d’Italia to start in Apeldoorn