Fernando Gaviria has taken Quick-Step Floors’ eleventh victory this season when he proved fastest in the sprint finish on the opening stage of the Volta ao Algarve.

The race began on Wednesday with a 182.9km-long stage between Albufeira and Lagos, a town which was returning in the race after a six-year hiatus, and the sprinters were expected to come into the spotlight at the finish.

Five riders made it into the day’s break, and Quick-Step Floors Cycling Team was among the squads to control the group which at one point had eight minutes in hand.

The pack gradually brought the quintet back, with the last man in the escape getting caught inside the final 25 kilometres, as the tension began to build up on the streets of Lagos in anticipation of the bunch sprint which was going to deliver the first overall leader of the race.

Maximiliano Richeze (Quick-Step Floors) moved to the front in the last kilometre and stretched out the peloton, forcing the other teams to pick up the pace. Gaviria opened up his sprint 170 meters from the line.

André Greipel (Lotto-Soudal) and Nacer Bouhanni (Cofidis) tried to respond to the Colombian’s acceleration, but couldn’t come around him, and Gaviria celebrated his third win of the season, following his two stage wins at the Vuelta a San Juan in January.

“I am very happy, because I just came back from Colombia, where I worked really well, and this win shows this. It was a royal sprint, with some of the world’s fastest riders fighting for victory, and to beat them is really nice, especially as the wind was pretty strong out there. A big thanks to the team, because they were perfect and did a superb job today”, said Gaviria.

“Yesterday I made a bet with Davide Bramati, who promised that if I win a stage here, then I get green light to line up at the National Championships on February 26th. I’m delighted to have won this bet and get the ticket for Colombia. It would be a huge pride to wear this beautiful jersey at least once in my career and I hope it will happen this year.” 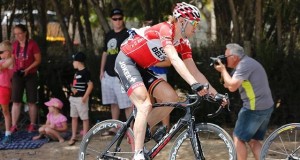