Lotto-Soudal rider Bjorg Lambrecht has been ruled out of starting the Santos Tour Down Under due to an admin error, his team have revealed. The young Belgian had been due to make his debut for the team in the first WorldTour stage race of the season

According to the UCI’s Anti-Doping Whereabouts programme, all neo-pros in WorldTour teams need to undergo three doping controls for their biological passport ahead of the start of their first WorldTour race and must have a backlog of six weeks (42 days) of whereabouts data before they can race.

However, according to his team, Lambrecht only received his login to the ADAMS whereabouts system on December 15 with the message that he needed to fill in his whereabouts as of December 17 (30 days before the start of Tour Down Under) to be able to start at Tour Down Under which conflicts with the 42-day rules.

“This is a huge disappointment,” said Lambrecht. “We came to Australia a week ago, I felt good in the group, was looking forward to my first pro season and then it’s a huge disappointment when you hear you can’t start. But of course we can’t take any risk. I will stay here to train for a week and then I will head to Melbourne with the team.”

Lambrecht won’t be replaced, which means Lotto Soudal will start with six riders on Tuesday instead of seven. However, he will be able to ride the Cadel Evans Great Ocean Road Race on January 28, because the period of six weeks will have been passed by then. 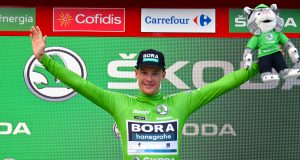 Sam Bennett takes over points jersey at the Vuelta a España