American Andrew Talansky ended Cannondale-Drapac’s two-year wait for a WorldTour win when he took a hard-fought victory atop Mt. Baldy on the fifth stage of Amgen Tour of California on Thursday. The 28-year-old out-sprinted race leader Rafal Majka (Bora-Hansgrohe) in an uphill dash to the line.

“I’m so happy,” Talansky said. “We needed that. That’s what happens when we have fun. We’re all overjoyed. The guys set it up on the stage. My form, as far as everyone else was concerned, was unknown coming into this, and the guys put full trust and full faith in me. I ended up losing a bit of time on Mt. Hamilton on Monday. Brendan Canty saved my day yesterday, the whole team did. I could have been a minute back after getting a flat at a bad time.”

Talansky will head into the penultimate stage in fourth overall with a 44-second deficit to Majka. George Bennett (LottoNL-Jumbo) is currently second at six seconds while Ian Boswell (Team Sky) is third at 25 seconds. The stage six individual time trial covers 24-kilometers around Big Bear Lake, which lies 2,000 meters above sea level.

“I’d prefer to be in the yellow jersey right now, but we won the stage today, and I’ll enjoy that,” said Talansky. “Tomorrow I’ll focus on the time trial. If we win this race, we win this race, and if we lose, we lose. Life goes on.

“Rafal is a great time trialist,” Talansky added. “I like my chances, but I can’t underestimate what he will do tomorrow. I have no doubt that we’ll both go out there and give it everything we have. Whoever ends up on top, ends up on top.”

A group of around 25 riders, initially including Cannondale-Drapac’s Lawson Craddock, broke away from the peloton before the first intermediate sprint. The escape splintered and then regrouped up and over Glendora Ridge Road, the first of three categorized climbs. Thirteen riders remained out front with a three-minute advantage at the 50 kilometer mark.

With the breakaway’s gap tumbling on Glendora Mountain, Rob Britton (Rally Cycling) went on the attack. The Canadian’s acceleration split the breakaway. In Britton’s wake, attrition had reduced the peloton to around 20 riders. Nate Brown and Brendan Canty had made the selection alongside Talansky.

On the descent between Glendora Mountain and Mt. Baldy, Brown paced Talansky towards the front of the group and lifted the tempo.

“I wasn’t on the front too long,” said Brown. “Ben King was moving Lachie [Morton] to the front at the same time.”

“Nate is getting stronger and stronger,” Talansky added. “His work was crucial today. It’s really nice to see his progression”

Talansky was the first of the general classification contenders to jump. His repeated accelerations caused further selections. Mid-way up Mt. Baldy, only eight riders remained in contention for the stage win.

Slightly before the three-kilometre mark, Talansky attacked yet again. This time he got a gap. Bennett bridged across with Majka on his wheel. The trio were joined by Boswell a half-kilometre later.

“We had the four of us more or less for the last few kilometres,” explained Talansky. “Obviously I would have loved to take a bit of time today but Rafal is super strong. He always fought his way back, put in a few attacks of his own. George Bennett did the same. I have a pretty good sprint, so once we were inside the last kilometre, I thought about winning the stage rather than continuing to attack.”

While Talansky has never climbed up Mt. Baldy at race pace, he knows the climb and has studied video of previous Baldy finishes. He used this knowledge to place himself on the inside of the final corner.

“It’s where you have to be,” said Talansky. “I’ve seen it play out enough to know that I wanted to come from underneath Rafal.”

“I’m happy I could deliver,” said Talansky. “This belongs to the team. It was a full team effort, and not only the team here, but the team as a whole. The team placed their belief in me and gave me time to prepare for this race. I don’t think you’d find that in many places. I’m happy I could pay them back with this stage win today.

“I’m from Miami, Florida, so that’s home, but this is my adopted home,” Talansky added. “I live up in Napa. I have family, I have friends here. It’s been awhile since I won a race. […] It’s fantastic to win this stage, be on the podium. Hopefully it made for some good bike racing today.”

Team boss Jonathan Vaughters watched the queen stage unfold from home. He was unsurprised to see the rider he dubbed ‘The Pit Bull’ climb to the top step of the podium.

“Andrew said he was going to win today, and he did,” said Vaughters. “When it wants it bad and when he sets his mind to it, he is a true champion.” 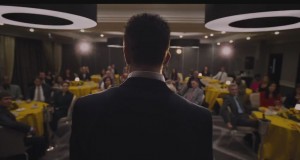 First glimpse at the trailer for the new Lance Armstrong film