Alberto Contador has stated that his main objective for the Critérium du Dauphiné this week is to use the race as preparation for the Tour de France.

The Trek-Segafredo rider was speaking at his team’s press conference prior to the start of the week-long race where he also spoke about his preparation for the Tour over the past number of weeks.

“Basically it has been a fairly meticulous preparation,” Contador said. “I took a few days off after the Basque Country, I took vacations to disconnect and then, little by little, I increased my training volume. The main block I have done was in Tenerife, at the Teide. I have been there for about 3 weeks and have returned a few days ago to continue here with the preparation.”

“Compared to previous years, I have been thinking even more about July and that explains why I have not yet done a lot of intensity work. I have not trained behind the motorbike yet, I have not done series of maximum effort yet.”

When asked about his ambitions for the Critérium du Dauphiné he said: “My main objective for the Critérium du Dauphiné is to leave from here in good shape. I will use this week as further preparation for the Tour. This race will allow me to make a series of maximum efforts, but I will take it with tranquility. I will see day by day how my power is evolving, how the level of the race is and, depending on that I will make decisions for the coming stages.”

“I don’t think you have to win the Critérium du Dauphiné to win the Tour de France. I’m more in favour of doing a good race, maybe to go more slowly but working at the shape everyday, rather than to be at the start line thinking only and exclusively of getting the victory. Maybe there are people for whom psychologically, to have a greater confidence, it is good to win, but not for me. Obviously, everyone likes to win, but Dauphiné is Dauphiné and the Tour is the Tour. I have always liked to prepare Dauphiné and Tour in a totally different way.”

The 35 year-old has been in good form this season, but the win has eluded him. So far, he has finished second overall in Vuelta a Andalucia Ruta Ciclista Del Sol, Paris-Nice, Volta Ciclista a Catalunya and Vuelta al Pais Vasco. However, this lack of a win does not seem to faze him.

“Coming here without any victory but with a lot of second places doesn’t really change anything for me,” said Contador. “Obviously, if this had happened to me in my early years as a professional, it would have changed something, but not now. And bearing in mind also that we now have power data to be able to analyse the performance you have had in each race, it is different.”

“This year it may seem a lie and complicated, but it were practically all second places in the rankings by one factor or another, but I’ve ended up very happy about how I’ve found myself physically and how I’ve recovered from the efforts. Although I do not have victories like other years, I’ve come here with more confidence even.” 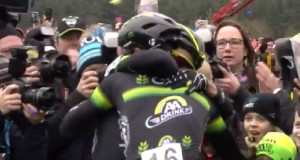 “It is good to say goodbye to a very beautiful sport.”...