The 2015 An Post Cycle Series was officially launched this week by the 2015 ambassadors; eight time All-Ireland winning hurler and former Kilkenny wing-back JJ Delaney, women’s 400m runner Marian Heffernan, comedian PJ Gallagher, musician Bressie and cycling legend Sean Kelly. The five event series which is a joint initiative between An Post and the Irish Sports Council will take place over the summer months between May and September.

All five ambassadors have declared themselves Series Cyclists and will be taking to their bikes this summer to ride alongside the thousands of people who join An Post Cycle Series events. Over 16,870 people in total took part last year and with more people cycling at all levels, the numbers are set to increase again.

The series caters for all ages and abilities, with routes ranging from a family 10k spin to the more challenging 50k, 60k, 100k and 160k distances.

JJ Delaney, who recently retired from Kilkenny’s inter county setup is hoping that by taking to the saddle he’ll be able to keep active and maintain the levels of fitness he has shown throughout his career.

“I’m retired now from senior hurling so I’m looking for a fresh challenge. I’ve always used the bike as a means of keeping fit and I’ve always found it really enjoyable. It’s a great way of getting out in to the fresh air with your friends and I’m looking forward to just giving it a go and trying something new.”

Marian Heffernan, who is on board as a Cycle Series ambassador for the second year, is continuing to lead the way for women this summer despite expecting her third child.

“I just love the day out at the Cycle Series. It’s a great to get Rob and the kids and just spend the day together on the bikes. It’s something every year we love to do as a family. Cycling has helped me maintain my fitness levels since my retirement and as a proud Cork woman, it’s lovely to see everyone in the community out together doing something healthy.”

Comedian and cycling enthusiast, PJ Gallagher, is no stranger to the An Post Cycle Series having participated in the Meath Heritage Cycle Tour for the last couple of years. “I love cycling and it’s a privilege to be a Cycle Series ambassador. Over the last couple of years it’s become a big part of my life. I’m always out on the bike with a few of my friends and we have such great craic. It’s a great social sport but keeps the waistline in shape as well!”

Donal Connell CEO An Post is delighted with the success of the events.

“An Post supports Irish cycling from this grassroots event through to elite racing. The sport continues to bring great health, economic and transport benefits and An Post Cycle Series is a great example of business and community working together at local and national level.”

“The Cycle Series is an event for everybody, all ages and all fitness levels, and is all about encouraging people to get active through cycling and developing habits of regular exercise which will ultimately lead to enhanced quality of life.”

An Post Cycle Series won the competitive Business to Community (Low Budget) category at the European Sponsorship Awards in February this year. ESA’s annual awards recognise excellence within the sponsorship industry across Europe.

Further details on each of the events in the Series, and how to become involved, are available on www.anpost.ie/cycling 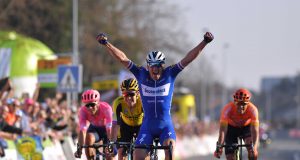