Alejandro Valverde (Movistar Team) has won the Vuelta al País Vasco for the first time in his career after finishing in second place on today’s final stage – a 27-kilometre individual time-trial in Eibar.

Valverde faced a challenge from both Ion Izagirre (Bahrain Merida Pro Cycling Team) and Alberto Contador (Trek – Segafredo) with Contador 9″ ahead of Valverde at the intermediate split (12km). However, a strong second half from Valverde saw him overcome his deficit and put 6″ into Izagirre before the finish and he finished 14″ faster than Contador.

Primož Roglič (Team LottoNL-Jumbo) won the stage finishing 9″ ahead of Valverde, with the Spaniard winning the race overall by 17″ from Contador.

Next up for Valverde is next weekend’s Amstel Gold where he will hope to add to his seven career wins in the Ardennes classics.

Alejandro Valverde: “Man, it was hard! I really wanted to win this Itzulia. I have been on the verge of success so many years, always came close without a win – fortunately, it seems like I’m on a good streak this season, and claiming overall honours at last makes for a very special success. Having no pressure before this race was possible thanks to that excellent start to 2017. It was a different País Vasco from previous editions, with lighter routes in the beginning – always demanding but not to much – and, at the end and as in every edition, it came down to the final TT. That’s where we had to give everything for the win.

“Obviously, it was a very demanding course today. Plus, it was stressful, with Ion, Alberto and myself really close to each other. I must say it was an important advantage to start as last, as I had all time splits from my rivals. I was a bit conservative into the first flat stretch after the Karabieta descent, because my team-mates departing earlier reminded me to keep some energy for the final 7km, after the Soraluze slopes, where the real difference was made. I just went on full steam from there and – well, the strategy was right

“I’m even more surprised than anyone about how things are going for me this season. Every single year, at this point of the season, I yell it’s my best start ever. But this time, you can’t have any doubts: it’s the best one. With everything that I’ve won so far, I’m heading into the classics without any stress… maybe if I win one in the Ardennes, I can skip the rest of the season! (Laughs) Seriously: I’m in very good condition and we must try and take advantage from it at the Ardennes. After that, we’ll have some rest and start preparing for the Tour.

“I want to thank the Basque fans for their support in such a spectacular, tight race. Also, my team-mates, for their continuous support, and my family, my kids and everyone who gets happy about my success – this is for you!” 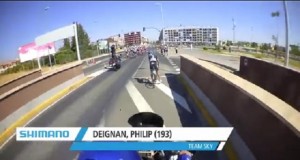 A mechanic’s view of the Vuelta