In addition to Fleche Wallonne and the Tour of Flanders, Amstel Gold is one of the few top races that has never been won by an Irish rider. They have come close on occasion though with Sean Kelly taking third in 1980 and sixth in 1981.

Perhaps the best chance of an Irish win though came in the 1982 edition when both Stephen Roche and Sean Kelly found themselves in contention inside the closing kilometres.

The race that year took the riders from Heerlen to Meersen over a course of 237 kilometres and the first big selection came when Gerrie Knetemann of the TI-Raleigh team forced the pace on the climb of the Lange Raarberg.

Knetemann was working on behalf of his team leader Jan Raas who had previously won in 1977, 1978, 1979 and 1980. Along with his team-mates Leo van Vliet and Frits Pirard, Knetemann was able to reduce the lead group to just sixteen riders, with five of those from the TI-Raleigh team.

A further selection was made on the Keutenberg when the lead group dropped down to six riders. Although Raas was there, he was left with no team-mates.

Raas would later state that he felt that Kelly was the danger man due to his sprint. The Irishman had already won four stages and the GC at Paris-Nice that year.

However, both Roche and Anderson could have fancied their chances as they were the only two with a team-mate present and Braun was clearly in good form having finished in third at Paris-Roubaix and taking the victory at Kuurne-Brussels-Kuurne.

Raas decided not to take any chances by trying to outsprint Kelly, so with a kilometre remaining, he jumped clear. The others hesitated and Raas got a gap.

Roche took up the chase and went after the Dutchman on his own but it was too late. Raas held on to take his fifth win, two seconds ahead of Roche, with Braun just pipping Kelly for third.

It was the closest there has been to an Irish victory and with no Irish riders lining up tomorrow at Amstel, the wait will continue for at least another year.

The video below shows the final few kilometres of the race. 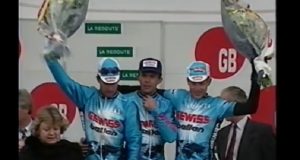 The most unbelievable Flèche Wallonne ever (VIDEO)