Based on a study by French consultancy and research firm Occurence, the sponsorship by Ag2r of its cycling team gained the company €130 million in media exposure for ​​the 2015 season (from January to September). This compares favourably to the €13m budget of the team for the season.

This result represents an increase of 34% compared to 2014, and is explained by the good performances from the team that boosted media coverage in television, radio, print and web.

“The strong performance of the riders generated a larger amount of media coverage, particularly in audiovisual media, which alone represents 60% of the 2015 advertising equivalent,” said Yvon Breton, Deputy CEO of Ag2r La Mondiale.

Amongst the team’s good results this season were two stages of the Tour de France – Stage 8 won by Alexis Vuillermoz and Stage 18 won by Romain Bardet. Alexis Gougeard won the 19th stage of the Vuelta a España, and Jean-Christophe Péraud won a stage and the overall of the Critérium International,

The Tour de France obviously counted for the most exposure for the team, with an average of 4 million viewers and 38% audience share per stage according to ASO.

Also, according to a survey by TNS Sofres conducted among a representative national sample of the population aged 15 and over, the AG2R La Mondiale cycling team is considered to be the favourite team of French people for the second consecutive year. 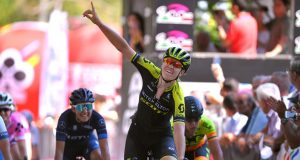