A strong Irish track team will be competing across sprint and endurance events over the next five days at the UEC Junior and U23 Track European Championships in Portugal.

The event takes place in the Sangalhos Velodrome in Anadia, Portugal from the 18th July to the 23rd July, and features the cream of Irish track cycling across the Junior and U23 categories.

Representing Ireland on the team are Mark Downey and Josie Knight, both of whom won silver in the European Junior Championships in 2014.

Downey followed up with a silver medal in the Points race last year as an U23 rider, before storming into the elite ranks winning three world cup gold medals last year, as well as a silver.

Also competing is Xeno Young, who finished fourth in the Junior Individual Pursuit at this event last year.

The UEC Junior and U23 Track European Championships serve as a springboard for Irish track cyclists, with riders like Sam Bennett and Ryan Mullen excelling in the event before moving into the professional ranks. 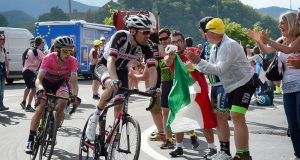