Following on from a successful start to the season in Australia, Sam Bennett (Deceuninck – Quick-Step) will be looking for more victories at the third World Tour stop of the season, the UAE Tour, which takes place between 23-29 February.

Wins at the Tour Down Under and Race Torquay served as confirmation of the Irish Champion’s solid form in the beginning of the season, who will be part of a star-studded field at the seven-day race, where the sprinters will have four opportunities to shine. Amongst the other top sprinters lining up at the race are Fernando Gaviria (UAE-Team Emirates), Pascal Ackermann (BORA – hansgrohe), Arnaud Démare (Groupama – FDJ), Caleb Ewan (Lotto – Soudal) and Dylan Groenewegen (Team Jumbo-Visma).

With the time trial missing this year, the general classification will be decided by the two stages finishing atop Jebel Haffet, the 12.5km-long climb averaging 6.1% which will make the gaps on the punchy finish to Hatta Dam completely irrelevant by the end of the week.

Also traveling to the Middle East for Deceuninck – Quick-Step will be Shane Archbold – who gets to sport for the first time his New Zealand national champion jersey won last Sunday – Mattia Cattaneo, James Knox (a top 10 finisher at the 2019 edition of the race), Danish Champion Michael Mørkøv, Pieter Serry and Stijn Steels.

“The number one goal is to win a stage and in Sam we have one of the favourites,” said Deceuninck – Quick-Step Directeur Sportif Geert Van Bondt. “He showed in Australia that he is in shape and we are really looking forward to the bunch gallops and our colourful lead-out train featuring Shane and Michael, while at the same time being aware it won’t be easy, as many top sprinters are at the start.”

“James has had a good start to the season in Valencia and we all remember his solid and impressive ride that helped him crack the top 10 overall last year at the UAE Tour, which would be nice if it were to happen again. The Jebel Hafeet climb suits him, but we’re not putting any pressure, we’ll just see how it goes. Mattia can also do a good race, while Pieter and Stijn will be there to help the team control the race,” concluded Van Bondt. 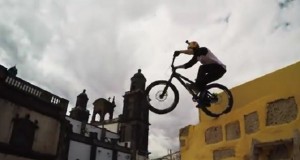 Cascadia – Danny MacAskill takes to the rooftops of Gran Canaria