Michael Matthews has taken his first one-day WorldTour victory at the Grand Prix Cycliste de Québec, timing his finishing sprint to perfection after a strong display of teamwork in Canada. The Australian won ahead of Greg Van Avermaet (BMC Racing) while Jasper Stuyven (Trek-Segafredo) was third.

The tough parcours featured almost 3000 metres of elevation with 16 laps of 12.6 kilometres each for a total of 201.6 kilometres with the riders facing three climbs per lap.

Almost immediately after the drop of the start flag, a five-man group managed to form a breakaway, and after only 25 kilometres of racing, Rob Britton (Rally), Bruno Langlois (Team Canada), Alex Cataford (Team Canada), Guy Sagiv (Isreal Cycling Academy) and Nicolas Dougall (Dimension Data) had built up an advantage of over 6:30. The peloton, which was predominantly led by BMC and Sunweb, set a moderate tempo and was not in any particular hurry to reel the quintet back in.

The main field gave the break considerable distance, and so the gap remained quite steady during the first eight laps. As the teams of the favourites took an increased interest in closing the gap, the advantage of the break began to sink.

With about 30 kilometres left, the race saw a series of attacks, at which point Peter Kennaugh (BORA-hansgrohe) attempted to bridge to the breakaway, which had been reduced to two riders – Britton and Sagiv. He was eventually able to make the junction on the penultimate lap.

After a few kilometres Kennaugh distanced himself from his two breakaway companions, and managed to carve out an advantage of 20 seconds with 15 kilometres remaining. Back in the main field, several riders took up the chase. Ultimately with around 400 metres to the finish Kennaugh was caught by the chasing field. It all came down to a mass sprint, which was taken out by Matthews.

Matthews said after his podium duties: “Wow, I’m super happy with the day I had, it really was a good day out today. The boys supported me really well throughout the day, and I’m just super happy that I could finish it off for them with a really strong sprint at the end.”

Team Sunweb coach Arthur Dongen added: “We started the race with a lot of confidence to go for the win today with Bling. After BMC started to control the race we joined in to help later with Stammie and Roy. Bling was never in difficulty thanks to the help of the other guys and did an amazing sprint at the finish. I’m super proud of the whole team effort.” 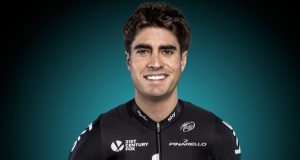 Mikel Landa to miss out on Vuelta due to injury