Team Sunweb’s Lucinda Brand finished off an impressive display of team tactics at the first women’s classic of the season at Omloop Het Nieuwsblad today in Flanders with her teammate Ellen van Dijk finishing in fourth.

In her first outing for Team Sunweb, Brand made her way into the main selection of the day over the Molenberg climb, and with teammate van Dijk already up the road in the main breakaway of the day, she was in a perfect position to launch her solo attack late in the stage to take an impressive solo victory.

After her victory Brand said: “It was a really good day. The team were great and supporting me really well by keeping me out of the headwind. The girls kept me in a great position, and we were in a perfect situation with Ellen up the road and good support behind. They helped me to maintain a good position ahead of the cobbles and climbs, so I didn’t have to do anything which was great.

“I started the Molenberg first and when the attacks went we got away in a small group. Ellen’s gap held well in front which was good for me then I bridged across on the cobblestones when the gap came down. Then we were six with a few strong sprinters so we wanted to get away. With about 10km to go we started attacking. I had my final attack with about 5km to go – this was really hard but Ellen did a great job behind reacting to everything.” 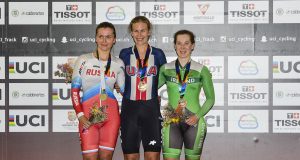