Lara Gillespie finished in 23rd place in today’s Women’s U23 race at the UCI Cyclo-cross World Championships in Valkenburg and was also fourth junior over the line.

In doing so, she achieved the best finish for an Irish rider at the Worlds. What makes the result even more remarkable is that she started in last position on the grid and had to fight to move up past numerous riders on a very tricky course.

Lara has shown talent on the road also but elected to focus on cyclo-cross this season. In Ireland, she won both the FIXX Series overall and the Elite women’s national title despite being still just a junior.

The young Orwell Wheelers rider is part of the largest ever Irish team for a Cyclocross World Championship and her result is a reflection of the growth of the sport in the country and the hard work that’s going on in the background. In preparation for the Worlds, the riders also competed last weekend in the final round of the World Cup in Hoogerheide.

The U23 race was won by Evie Richards (Great Britain) who finished 38″ ahead of Ceylin Del Carmen Alvarado (Netherlands) with Nadja Heigl (Austria) in third at 1’04”.

Racing concludes tomorrow with the U23 Men’s race followed by the Elite Men’s race. 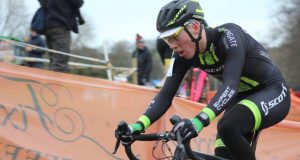