Josie Knight took her second stage win in as many days as she led in a group of eight at the end of the second stage of Rás na mBan in Piltown Co Kilkenny today. The Team Great Britain rider edged Elynor Backstedt of Storey Racing and the best of the Irish, Alice Sharpe of Team Ireland who finished third.

In fourth place on the day and moving into the lead of the Kilkenny Best Irish Rider jersey was Mayowoman Maeve Gallagher of Team Ireland. Natalie Grinczer (Brother UK Fusion RT) was fifth ahead of Knight’s Team GB team-mate Anna Shackley with Claire Steels three seconds back in seventh place, just ahead of Molly Patch who was the eighth and final member of the breakaway group which assembled on the first of two ascents of Templeorum on the 20km finishing circuit around Piltown which completed the stage.

Tomorrow’s third stage from Kilkenny is the longest of the week as it takes the riders to a summit finish on The Cut in the Slieve Bloom Mountains, County Laois where Knight will be aiming to defend her narrow five-second lead over Claire Steels.

Backstedt led over the top of both classified climbs of the day at Templeorum to take over the lead of the Wicklow 200 IVCA Queen of the Mountains Classification.

Along with collecting another Just-Print.ie stage winner’s jersey and her general classification advantage, Knight continues to lead the Cycling Ireland Best Young Rider Classification and the Points classification.

Afterwards she described her delight at capping a day in the leader’s jersey with another stage victory.

Josie Knight (Team Great Britain): “It was a bit tough, that hill on the finishing circuit, it was pretty hard. I didn’t go into it in the best position, so I really had to work hard to get into that front group over it the first time. And then I was so outnumbered by Brother UK Fusion RT and I thought, ‘Just come on stay on their wheels, stay on their wheels!’ 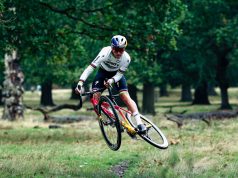 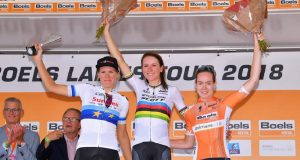