Ireland’s Shannon McCurley has won silver in the Scratch Race on the opening day of the UEC European Track Championships in Apeldoorn, the Netherlands. The 40-lap race was won by Emily Nelson of Great Britain with Maria Martins of Portugal taking the bronze medal.

Nelson led the group into the final two laps with McCurley on her wheel and they held these positions over the finish line as Martins overtook Ana Usabiaga Balerdi of Spain for third.

Speaking after the race 27 year-old McCurley said: “With seven laps to go I was right at the back. I think I was hopeful that it was all going to go up and it did and I think with about three (laps)to go I spotted Emily shoot down the bottom and I knew she had good legs, she was coming into this strong, and that was the wheel I wanted to be on.”

“Yeah, it’s been a long time coming. As you saw me at the end of the race, I was speechless.” 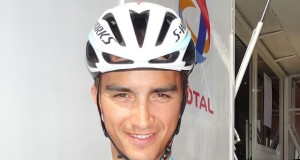