Geraint Thomas has signed a contract extension to remain with Team Sky. The Welshman, 29, has been a member of Team Sky since its inception in 2010.

Thomas switched his focus to stage races this season, winning the Volta ao Algarve in February before claiming his first Paris-Nice title in March. He is expected to be a crucial part of Team Sky’s bid to win a fourth Tour de France in July.

Speaking from Team Sky’s training camp in Tenerife, he said: “Signing again was an easy decision. Team Sky feels like home. From the other riders to the staff, I love it here.

“I’ve only really just started when it comes to trying to win stage races. I’m learning all the time about how to get in the best shape for them and how to lead a team.

“For me, this year started with winning Paris-Nice and is now about going to the Tour in the best shape possible to support Froomey. After the Tour we can start looking to next year and keep setting bigger and better goals.

“It’s about keeping that progression going, and Team Sky is the best place to do that. I’m just super happy being part of the team.”

Team Principal Dave Brailsford has welcomed Thomas’ decision to extend his stay with the team. He said: “We’re all delighted that Geraint has renewed his contract with Team Sky. He epitomises what the team is all about both on and off the bike. He’s a great ambassador for Team Sky, cycling and, let’s not forget, Wales.”

Looking ahead, Brailsford is excited about what the Welshman can achieve in the next chapter of his career.

He added: “Geraint is one of the most versatile bike racers in the world. He has demonstrated this by winning on the track, in the Classics and now in stage races.

“He has gone from strength to strength and winning Paris-Nice this year was another step up. I think it gave him real confidence and now he can set his sights on developing his performances in the Grand Tours.

“I still believe the best is yet to come from Geraint and we will enjoy supporting him to see just how far he can go.” 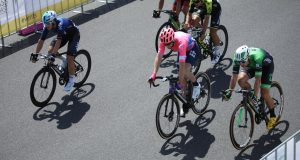