Davide Villella pulled on the Vuelta a España’s blue and white spotted King of the Mountain jersey in Andorra la Vella on Monday. The Italian made it into an eight-rider breakaway and picked up points on two of three categorized climbs on the stage three menu.

“This morning at the bus, I was one of the riders that could go into the escape,” explained Villella. “I wasn’t really thinking about the mountain jersey – only about the good opportunity the break might have to make it to the finish. We were a strong group of eight riders.”

The plan shifted from chasing the stage win to hunting mountain points early on in stage three. The 153-kilometre day took the peloton into the Pyrenees as it headed out of France and into Spain and Andorra. Three categorised climbs tested fresh legs: Col de la Perche (category 1), Coll de la Rabassa (category 1) and Alto de la Cronella (category 2).

Fabrico Ferrari (Caja Rural – Seguros RGA) was the first to attack, and Villella was part of a trio of riders that bridged across. Another four joined the escape before the group hit the lower slopes of Col de la Perche after 12 kilometres of racing with a four-minute advantage over a Quick Step-led peloton.

“There was a small possibility that the break was going to be a successful one today,” said sport director Juanma Garate. “We decided this morning to involve five riders and Villella was one of them. He jumped in the right moment and went in the move, but once he was in, we saw the reaction of QuickStep and decided to go for the points. We saw that we didn’t have chances to arrive at the finish because QuickStep was riding too hard.”

Villella was second to crest the summit of Col de la Perche, behind de Gendt, to pick up six points.

“It wasn’t stressful to race for the points,” said Villella, who spent much of the stage as virtual race leader. “I was having fun.”

Villella and company continued to collaborate until the run-in to Coll de la Rabassa when Dumont attacked the group. His escape was short-lived. The rest of the break caught Dumont at the base of the Rabassa. They began the climb three minutes ahead of the peloton.

The break shattered up the Rabassa, and Team Sky, who took over the pace-making in the peloton, thinned out the field to less than 50 riders en route to the summit.

The pair were swept up by the reduced bunch on the decent, but by then, Villellla had all but secured the KOM jersey.

With the general contenders battling up the final climb, the Alto de la Cronella, Villella’s 12 points proved plenty. He’ll start the pan-flat stage four with a two-point advantage over both Geniez and De Gendt.

“I’ve never worn a jersey at a Grand Tour,” said Villella. “I won the mountain jersey in 2014 in the Basque Country, but that’s it.

“I hope to keep the jersey as long as possible,” he added. “It will be tough, but it’s also not the main priority. The biggest goal here is to fight for a stage victory, so that will be my focus.” 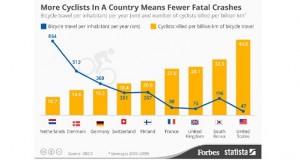 The more cyclists in a country, the fewer cycling fatalities