Team Dimension Data for Qhubeka have confirmed that Danilo Wyss has agreed terms and will join the team on a two-year contract, from 1 January 2019. The 32-year-old Swiss rider has been with the BMC Racing Team for his entire career and now, after 11 years, will join the African team.

Amongst his best results in his career to-date include victory in the Swiss National Road Race Championships in 2015 and a stage of the Tour de Beauce in 2009. He was also a member of the winning team who won the team time trials at the 2015 Tour de France and 2012 Giro del Trentino. He has also completed ten Grand Tours.

2018 has seen Wyss involved in a busy schedule having raced the Tour Down Under, Tour of California, Critérium du Dauphiné, Tour de Romandie, Volta a Catalunya, Tour of the Basque Country as well as Tour de Yorkshire.

Danilo Wyss – “I’m really happy to take on this new challenge. I have been riding on BMC bikes for 11 years now and it’s really nice to keep that particular story going, as BMC will also be the new bike supplier for Team Dimension Data (from 2019).

“We will, of course, look to be successful on the road but I also really like the way in which the team supports the Qhubeka charity. I realise that I’m very lucky to be able to live my passion by being on the bike and this new opportunity means that I will be able to help others through the team, as well as through Qhubeka.”

Douglas Ryder – Team Principal – “Danilo brings a huge amount of added experience to our squad that will be crucially important for our 2019 campaign and beyond, and we’re very excited to have him join us.

“In addition, his long-standing relationship with our new partner BMC is a huge bonus, not only from a technical perspective, but also in relation to the deep understanding of what BMC Switzerland founder Andy Rihs meant to the sport.

“All of us, across the peloton, would have benefitted in some way through his passion and to have someone like Danilo being able to share that with our team will provide additional motivation and inspiration. We look forward to having Danilo link up with us and being part of our team’s future success.” 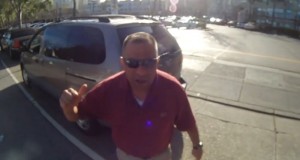 Irate driver in San Francisco cuts up a cyclist and then...