Cycling Ireland have officially pledged support to 20×20 by signing a 20×20 Charter with the Federation of Irish Sport.

The 20×20 movement is about creating a cultural shift in the public perception of girls and women in sport and seeks to change the subliminal bias in the Irish psyche that exists around girls and boys, or women and men, when it comes to sport.

The commitment was made at Rás na mBan, Ireland’s premier international stage race for women. The race attracts 21 teams from around the world for a total of 400km of top-class international bike racing over six stages in five days. Fans of the sport have the opportunity to see their heroes in action, heroes such as Alice Sharpe, Grace Young, Katharine Smyth, Maeve Gallagher and Lara Gillespie of Team Ireland.

Under the ‘20×20 Charter’ Cycling Ireland has committed to:
• Increasing female participation at rider, coach and administration level
• Increasing media coverage of our female international teams and domestic events

Commenting on this announcement, Cycling Ireland CEO, Matt McKerrow said: “We’re proud to be signing the 20×20 Charter today. We’ve a number of examples of inspirational and strong women competing in, officiating and administering our sport; and we are committed to growing these numbers because we welcome and value the diversity of skills and knowledge this will bring.

It’s especially fitting to be taking this step here in Kilkenny at Ras Na mBan – Ireland’s premier women’s race, with a number of our Team Ireland female athletes in action, showcasing the opportunities for young girls to be involved in cycling in Ireland”.

Mary O’Connor, Federation of Irish Sport CEO added: “We’re delighted to have Cycling Ireland’s support of the 20×20 movement. 20×20 has gone from strength to strength as a result of the support and hard work of the 71 sporting organisations committed to the 20×20 goals. Cycling Ireland are the latest sporting organisation to join an ever-growing movement to shift the dial on women in sport. What better day to mark their support than at an action-packed stage of the Ras na mBan. The event is a fantastic spectacle for women in cycling and an opportunity to show young girls how if they can see it, they can be it.”

Rás na mBan Race Director, Valerie Considine welcomed the announcement: “We at Rás na mBan are delighted that Cycling Ireland are endorsing the 20×20 initiative. Our race is an International event at the pinnacle of Irish cycling and serves to inspire women of all ages to a healthy participation in sport. We are firm believers in the 20×20 message that a greater visibility of women’s sport leads to greater involvement at all levels.

“We have worked hard over the last 14 years to create our promotional structure to make our race, and by extension women’s bike racing, visible and accessible for fans and racers alike and any impetus that can be given to the task of spreading the message is to be welcomed.” 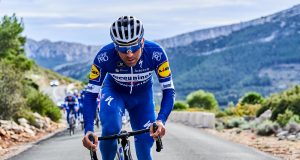