Briton Adam Yates (Mitchelton-SCOTT) had a strong ride in today’s individual time trial to move himself into the overall race lead after four-days of racing at Critérium du Dauphiné.

Yates started the stage in 10th place overall, 24 seconds down on race leader Dylan Teuns (Bahrain-Merida), and after his powerful performance resulting in sixth place on the stage, the 26-year-old did enough to move into the race leader’s jersey, four seconds ahead of Teuns.

In the early proceedings of the 26.1 kilometre time trial, it was Alex Dowsett (Katusha-Alpecin) who set the early bench mark with a time of 35 minutes 16 seconds.

The fairly technical course with one climb up to 613 metres, saw some large time gaps opening up, and the general classification began to naturally take shape. Things got interesting in the second part of the race as Woet van Aert (Team Jumbo-Visma) beat the next best time set by stage favourite Tom Dumoulin (Team Sunweb) by over 47 seconds.

Knowing the time to beat, Yates set off and headed through the first time check after 11.5 kilometres of racing, with a promising time of 19 minutes 16 seconds, which was good enough for a provisional third fastest time.

After fighting his way around the final downhill kilometres of the course, Yates eventually crossed the line with a very respectable time of 34 minutes 34 seconds, for sixth position.

As the last nine riders completed the distance, Yates sat as the virtual race leader waiting patiently to see Teuns’ time. Having given everything he had, the Mitchelton-SCOTT rider’s time proved to be enough to move into the yellow jersey with four-hard stages to come.

Adam Yates – “I went out, did the best I could and here we are. We knew it would be a hard day but it was a very good course for me, really. These big long straights aren’t my favourite but I put my head down and rode the climb as fast as possible.

“I made a good time. It was a good day for me. It’s a sprinters’ stage tomorrow, so hopefully other teams will be eager to control. It’ll be a massive task to bring the yellow jersey until the end. I hope to do it but I’ll take it day by day. It’s gonna be tricky. I’m sure the mountain stages will be hard to control.” 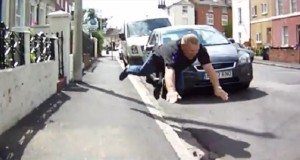