Adam Yates (Mitchelton-SCOTT) retained his race lead at the Tour de France as the breakaway stayed away on stage six. The Briton finished in a group containing all of the favourites, 2′ 53″ behind stage winner Alexey Lutsenko (Astana Pro Team).

The 191-kilometre stage from Le Teil to Mont Aigoual had been earmarked as a potential one for the general classification contenders, but a battle for the overall failed to materialise with Yates crossing the line safely in the reduced peloton.

In contrast to yesterday there was action as soon as the flag dropped to signal the start of the stage, with riders eager to get into the breakaway knowing they may be allowed to stay away until the finish. Mitchelton-SCOTT kept a close eye on the riders heading up the road before eventually allowing eight riders – Rémi Cavagna (Deceuninck-QuickStep), Nicolas Roche (Team Sunweb), Greg Van Avermaet (CCC), Jesús Herrada (Cofidis), Neilson Powless (EF Pro Cycling), Edvald Boasson Hagen (NTT), Daniel Oss (Bora-Hansgrohe) and Lutsenko (Astana) – to go clear.

With the yellow jersey on the shoulders of Yates, his team assumed their place at the head of the peloton for much of the stage. The escapees were allowed to stretch their advantage out to a maximum of six minutes before the gap began to fall on the approach to the day’s climbs.

Team Jumbo-Visma took up the pace making on the first of the two third-category climbs, and the increase in tempo saw the gap to breakaway halved down to three minutes. INEOS Grenadiers then moved to the front of the pack over the following ascent and into the foot of the category one Col de la Lusette.

Yates remained calm and was hovering around the head of the peloton with Basque climber Mikel Nieve and Giro d’Italia stage winner Esteban Chaves for company. The gap to the breakaway went on to fall to under three minutes by the summit, but an attack by eventual winner Alexey Lutsenko (Astana Pro Team) saw it stretch out again.

Heading onto the final uphill drag to the line it was clear that the remains of the break would take the stage victory, while behind, Nieve placed himself on the front of the bunch, setting the pace and guiding Yates through the finale to retain the yellow jersey.

Adam Yates: “It was nice [the first day in yellow], I think we controlled quite well, it was a strong breakaway and there were a lot of guys that really wanted to go in there today. It was pretty much flat all the way into the climbs, so it was quite hard to control, but I think we did a good job and in the end I still had Mikel and Esteban in the final, so all in all, a good day.

“I think just the way the break already had the gap and all the bonuses were already taken, there wasn’t really much to gain from anybody attacking. Also, the final climb wasn’t super steep, so it takes a lot of effort to get a few seconds, so everyone just kept their energy and saved it for a later day.

“Like I said yesterday, it was a strange situation, but I think we rode well today and hopefully we did the jersey proud. I still want to win a stage, that’s what we came here to do, but it’s pretty hard to throw away time when you’re in the lead, so I think for now we’ll just play it day-by-day and see what happens.

“Tomorrow’s a sprint stage and then we’ve got two really hard stages. These two stages I actually know quite a lot of the climbs, so it’s going to be really tough, but like I said before, we’ve got a super strong team here, not just for the flats but for the climbing stages, so I’m looking forward to it.” 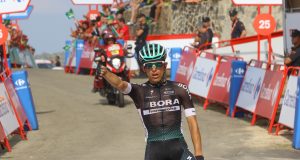 Rafal Majka wins stage 14 of the Vuelta a Espana as...