The 26-year-old accelerated with 800 metres to go from a select group which attacked inside the last 25 kilometres and held on to take his first win of the season.

The 73rd edition of the classic, which was raced in atrocious conditions, was enlivened 80 kilometres from the finish, when several riders pinged off the front, forcing the others to react. Soon after, Iljo Keisse (Quick-Step Floors) moved to the front of the bunch and split it into four groups. The wintry conditions, the crashes and the suffering led to more and more abandons, so by the time the riders hit the Taaienberg, one of the race’s main climbs, only 30 riders were still left at the front.

When Tiesj Benoot (Lotto-Soudal) and Greg Van Avermaet (BMC) went clear, Lampaert was one of the riders to chase down that move and make the junction with a limited number of others.

A group of 12 riders entered the last 25 kilometres of the race, before Sep Vanmarche (EF Education) increased the pace and went on the offensive, being joined by four other riders – Lampaert, Mads Pedersen (Trek-Segafredo), Mike Teunissen (Team Sunweb) and Edvald Boasson Hagen (Dimension Data).

The quintet worked well together opening a 50-second advantage on the chasers. Mads Pedersen (Trek-Segafredo) attacked inside the final kilometre with Lampaert responding and sensing a lull in the group, he sprinted and went into time trial mode, quickly putting a significant distance between him and the other four. He wasn’t to be caught and had time to celebrate his first victory of the season, one which took Quick-Step Floors’ 2018 season tally to 20 wins.

“We knew the weather could influence the race, so we had two plans. Go for a sprint with Elia or make it really hard for the others in case he wasn’t there in the final part of the race. When Viviani got caught behind, together with Niki and Styby we decided to ride hard and see what happens, especially as the rain and cold took their toll on the riders and many were on their limit”, said Lampaert, after retaining his crown and becoming the first ever rider to win Dwars door Vlaanderen in consecutive years.

“When the hostilities began and Vanmarcke attacked, Niki told me to go, so I jumped and joined the front group. We worked together there and rode full gas, making sure we had a nice advantage for the final. Then, when Pedersen attacked, I responded and seeing I had got a gap, I sprinted to increase my margin and gave everything I had in the tank, knowing many of my rivals were faster. I am super happy to get another win in this race, with such a high-level field and so close to my home. To resume our winning run in Belgium feels great and gives us an extra boost of confidence ahead of Sunday’s De Ronde”, concluded Lampaert. 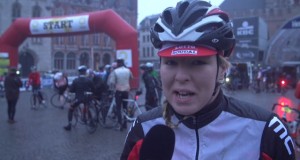 Cyclists speak ahead of the Tour of Flanders cyclosportive