A number of riders tried to go clear on the run in to the finish but were unable to create a gap before the final 3-kilometre climb. Meurisse attacked in the last kilometre through the centre of Caravaca de la Cruz, distancing his competitors.

The Circus-Wanty Gobert-Tormans rider took his first victory of the season ahead of De Vos and Černý and will defend the leader’s jersey on the final day on Saturday. The peloton finished more than 16 minutes down. Meurisse leads De Vos by 4″ with Černý a further 7″ behind.

The second and final stage is 179.6 kilometres from Santomera to Murcia and includes the categorised climbs of the Alto Espuna (10.6km, 3.9%) and the Alto de Collado Bermejo (7.2km, 7%).

Xandro Meurisse: “When the breakaway is formed after 20 kilometer, you know it’s going to be a long day. But the collaboration was good and all teams were represented with at least one good rider. We soon understood that we had chances to succeed, unless Movistar Team wanted otherwise. I focused on a couple of dangerous riders, but others did the same with me. Despite some attempts, I didn’t manage to break away. We studied the final climb well with the team, so I knew perfectly how to position. The final 75 meter were very steep, but I had a slight gap!”

“This situation is new for me. I’ll have to defend a leader’s jersey for the first time. I’m confident about the Alto Espuma, and I also count om my teammates!” 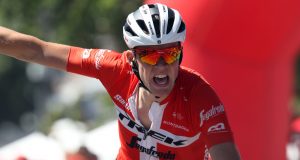 Mads Pedersen takes sixth victory of the season for Trek-Segafredo