There was great news today for Irish off-road fans as it was announced that Wicklow would be included as one of the venues for the 2016 Enduro World Series. It follows on from a very successful first running of the event this year.

The 2016 calendar will feature eight rounds across three continents, including four completely new venues in Chile, Argentina, France and the USA. The series starts off with two rounds in Patagonia, firstly in Valdivia, Chile before moving onto Bariloche in Argentina.

The third round then takes place in Wicklow. This year’s Emerald Enduro took place on Carrick Mountain, near Wicklow Town and was also the 3rd Round of the series. The riders had to complete seven timed technical downhill stages, in a rally style format called ‘Enduro’. Local rider Greg Callaghan ended up taking the victory in front of an incredibly enthusiastic crowd.

The organisers said of the round in Wicklow: “Ireland may not be home to the biggest mountains in Europe, but what it lacks in height it more than makes up for in character. Home to some of the craziest fans the series has ever seen, it’s safe to say riders will be pleased to see Carrick Mountain back on the calendar after this year’s incredible event. Fun will be high on the agenda at this one day race with a laid back vibe.” 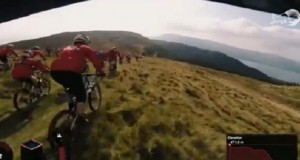