The BBC have produced a radio documentary on the passion for cycling in Colombia. ‘The Flying Colombians’ tells the background of the Vuelta a Colombia and how the race captured the imagination of the public.

Alongside the radio documentary, a short video has also been produced on the topic, which describes the early years of the Vuelta a Colombia.

The video features Vita Osorio Sanmartín who inherited a bike from her bike-racing father who was murdered in Medellin when she was just three years old in a killing linked to Pablo Escobar.

Colombia is a country of passionate cyclists. The first bike races took place in Bogota in 1894 and by 1898 it was one of the first countries to have two purpose built velodromes. In the 1950s the great Vuelta a Colombia, a tour of Colombia, was born – 35 cyclists covered an extraordinary 779 miles in 10 stages. All over the country people listened to the commentary on radios and it began to link up Colombians in a common cause.

This is more than just a sporting event. The first Tour took place just two years after the assassination in 1948 of Liberal party leader Jorge Eliécer Gaitán, which was the catalyst for a bloody sectarian conflict between Liberals and Conservatives, creating deep, violent divisions especially in rural areas. The first Tour was thus promoted as a sign of peace and goodwill, reconnecting the country and reaching into rural communities. Through the turbulent decades that have followed, the Tour has continued to go through parts of Colombia that rarely receive any attention.

We join the annual Vuelta a Colombia, cycling the mountains, cities and villages, to find a totally different perspective on the country. This is an event which brings Colombia to a standstill – that is unless you are on two wheels.

You can listen to the documentary in the link below: 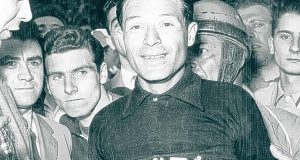 The fight to be last at the Giro d’Italia