The Col d’Aspin may not be the hardest or most iconic climb that features in the Tour de France, but in the 1950 edition of the race, it was the scene of considerable drama.

The climb featured on the eleventh stage of the race from Pau to St. Gaudens and two-time Tour winner Gino Bartali was away with French rider Jean Robic. On the Aspin though, Bartali accidentally brought down Robic and faced a particularly hostile crowd.

The Italian continued on to win the stage in St. Gaudens but later described the threats he had received from spectators. Bartali said that he had been punched and kicked and had even been threatened by one man with a knife. He wanted to quit the race. “I am going because I fear for my life,” Bartali said. “I have been attacked by angry spectators One even brandished a knife.”

The race director Jacques Goddet had to intervene to prevent the situation on the Aspin from escalating, but French rider Louison Bobet denied that Bartali had in fact been struck. “I don’t deny it that the Italians had been insulted during the ascent of the Aspin,” said Bobet. “Still, I think I can state that during the few seconds that it took to free us from our bikes, Bartali was not struck.”

Bartali told the Italian team manager Alfredo Binda that he was quitting the race and that the other Italian riders should follow suit. However, not all of the Italians were in agreement with Bartali. One rider who wanted to stay was Fiorenzo Magni who was leading the race.

Goddet begged the Italians to stay and they even tried to arrive at a compromise – offering to allow the Italians to rider in neutral grey jerseys so that spectators would not recognise them. He even offered them an armed escort. However, Magni reluctantly agreed with Bartali and all of the Italians pulled out – both the main Italian team and the Italian Cadets team.

The decision also resulted in the fifteenth stage of the race being altered. Instead of finishing in San Remo in Italy, it would finish in Menton in France.

Regarding Bartali’s allegation that he had felt threatened by a spectator with a knife, L’Equipe journalist Pierre Chany had a different take on the incident.: “I saw this witness, he actually had a knife in his right hand,” Chany said, “and a salami in his left hand.” The man had apparently been enjoying a picnic when he was coming to the aid of the Italian, rather than attacking him.

Bartali’s decision to withdraw from the Tour was unpopular amongst many fans and fellow cyclists, and some including Magni claimed the move was to ensure that his fellow Italian was denied the opportunity to win the Tour.

Here is some footage from that stage: 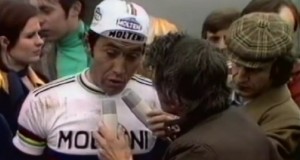 Eddy Merckx and his experiences of The Tour of Flanders (VIDEO)